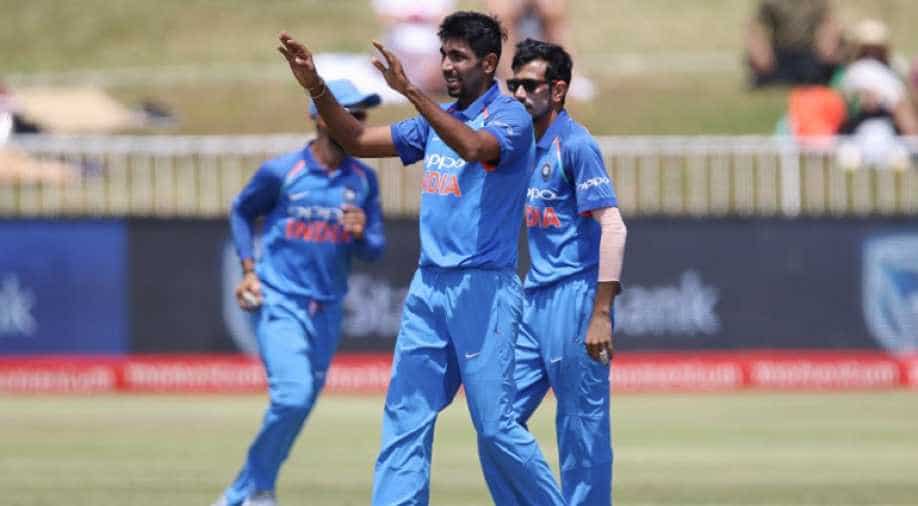 Jasprit Bumrah (C) celebrates a wicket during the first One Day International cricket match between South Africa and India Photograph:(AFP)
Follow Us

Faf du Plessis top-scored with 120 off 112 as South Africa finished their innings for 269/8 against India in the first of the six-match one-day international series on Thursday.

The Proteas brought back Aiden Markram at No.4 along with Jean-Paul Duminy and Imran Tahir into the side.

India, on the other end, decided to play three seamers, and three spinners.

Indian Skipper Virat Kohli gave his team an injury scare when he landed awkwardly on his left knee while fielding in the first one-day international against South Africa at Kingsmead on Thursday.

After Bumrah gave India the first breakthrough sending back Amla for 16, opener Quinton de Kock and skipper Faf du Plessis together struck a partnership of 50 runs to save the team early blushes.

Chahal broke the partnership as he dismissed the wicketkeeper-batsman de Kock for 34 runs. He also took Aiden Markram's wicket.

Kuldeep Yadav also struck twice for his team and sent back Jean-Paul Duminy and David Miller back to the pavilion for 12 and 7 runs respectively.

South Africa scored 156 for the loss of five wickets after 34 overs.

South Africa and India are vieing for the world number one ranking in the six-match one-day international series.