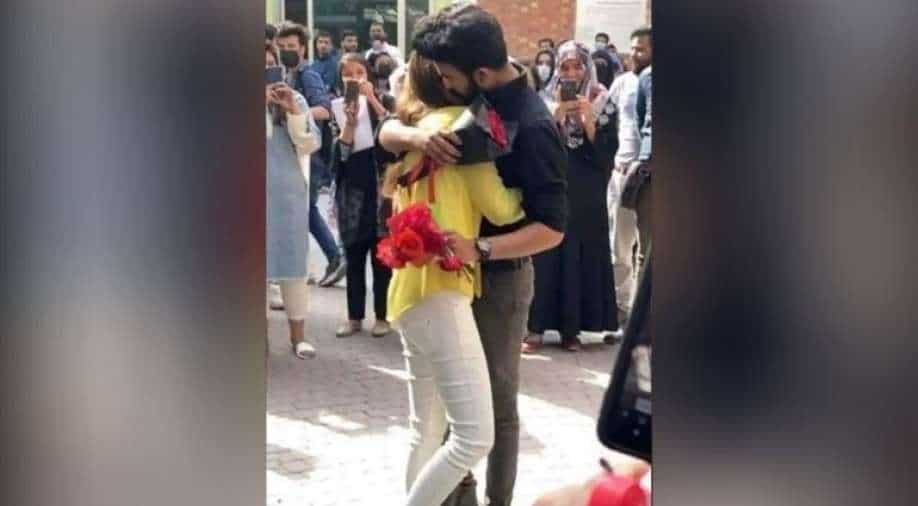 A screen grab of the viral video of the incident. Photograph:( Twitter )

A top Pakistani university has expelled two students for hugging and proposing on campus, after a video of the incident went viral on social media.

A special disciplinary committee of the University of Lahore held a meeting on Friday and summoned the two students but they failed to appear.

The committee then decided to expel the boy and the girl and banned them from entering any of the university's campuses. According to the University of Lahore, the two students were involved in gross misconduct and violation of university rules. The students in question were summoned before the committee but failed to appear. Thus, in pursuance of Section 9 of the General Discipline and Code of Conduct on the Campus, the committee has decided to expel the two students for violating the varsity's rules and regulations and serious infraction of the code of conduct. Furthermore, as per Section 16, they are debarred from entering the premises of University of Lahore and all its sub-campuses," read a statement from the University of Lahore.

The video of the proposal took Twitter by storm, it was one of the top trends on social media last Thursday when the incident took place. The viral footage shows the girl with her right knee bent on the ground, holding a bouquet of roses, proposing to the boy, who then takes the flowers and pulls the girl for a hug. Nearby students are seen cheering them along.

As the footage went viral, the university took notice of it.

Expulsion of the couple drew mixed reactions on the internet. A social media user posted the picture of Indian film legend Amitabh Bachchan from the movie 'Mohabbatein' where he played a college principal, who was against romance in college.

"Presenting to you, the Principal of the University of Lahore," read the caption with a photograph of Bachchan.

Former cricketer Wasim Akram's wife Shaniera Akram said in a tweet: Apply all the rules you want but you can't expel love! It's in our hearts, it's the best part about being young and it what makes life worth living! You learn more about love than you can ever learn at an institution.