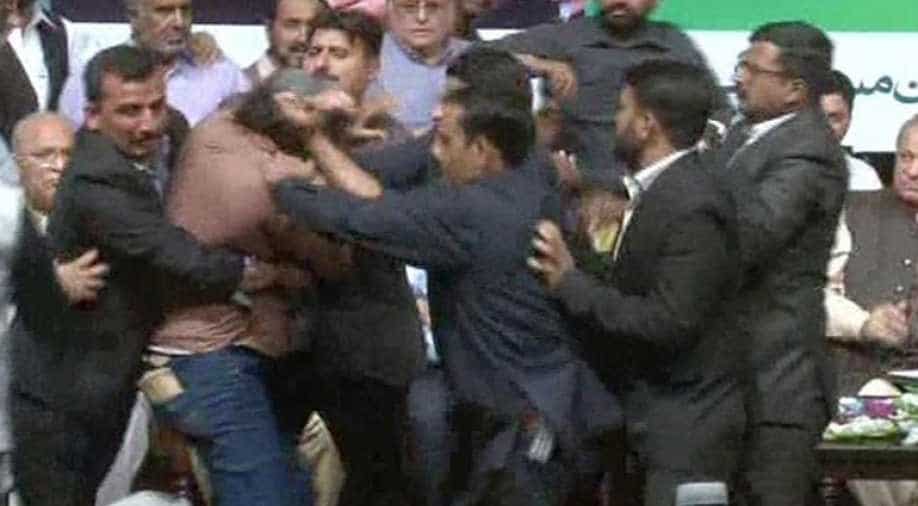 As the man extended his hand to meet Nawaz, he was overpowered by the security staff who began to thrash him and take him away from the scene. Photograph:( Twitter )

The security guards of former Pakistan prime minister Nawaz Sharif on Monday thrashed a party worker of the ruling Pakistan Muslim League-Nawaz (PML-N) when he tried to shake hand with ex-PM at an event in Lahore.

In a video clipping, the man can be seen moving toward Nawaz and extending his hand.

The security personnel then quickly circle the man and continued beating him.

The supporter was manhandled despite Maryam Nawaz and the PML-N supremo asking the security officers to set him free.

Nawaz Sharif's daughter Maryam denounced the behaviour of the security officials, saying, “The PML-N supporters have a special relationship with their supremo.”

A video by ARY news shows the man walking towards Nawaz and extending his hand for a quick handshake.

Moments later the PML-N has issued a clarification saying that there was a security breach. They further said that the man wanted to shake hands with the ex-PM, despite the security personnel asking him to identify himself he failed to do so.

Later, talking to reporters, the man said he approached Nawaz because he wanted to pay his respect to him and Maryam.

'It was my mistake to approach Nawaz Sharif on the stage in the way i did, i apologise for that and security did the right job by stoping me'... Please know that Pakistani media will not show u this passion of a Nawaz sharif lover #DefenderOfPakNawazSharif pic.twitter.com/qLk1LlQaWM