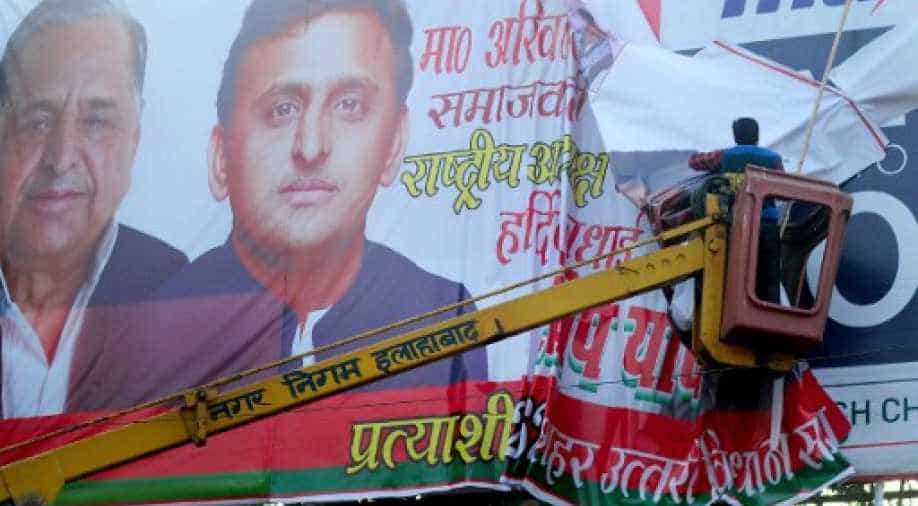 Sources saidthe Congress wanted to contest in 110 Assembly seats, whereas the Samajwadi Party, or SP, were willing to concede not more than 99. Photograph:( AFP )

Elections in Uttar Pradesh, India's most populous state, are around the corner but the ruling party has failed to forge an alliance that they were seeking with other political parties.

Two days after ruling Samajwadi Party called off talks with Rashtriya Lok Dal, or RLD, the regional party was dealt another blow Saturday when talks with the Congress about a pre-poll alliance collapsed due to disagreement over seat-sharing plans.

Prospects of an alliance remained strong till Monday, but cracks appeared when the two parties sat down to thrash out the nitty-gritties of the partnership.

Unnamed sources told WION that the Congress wanted to contest in 110 Assembly seats, whereas the Samajwadi Party, or SP, were willing to concede not more than 99. The sources said the possibility of an alliance were unlikely due to the impasse.

“They were even very rigid on seats from Amethi and Rai Barelli,” said an unnamed Congress source involved in the negotiations.

Sources also said that the Samajwadi Party was initially willing to give 121 seats to the Congress but later brought it down to 99 seats. “Akhilesh Yadav kept on changing goal posts. He told us that he needs to accommodate those who have stood by him,” a source told WION.

Trouble started when Akhilesh Yadav, UP chief minister and Samajwadi Party leader, decided to pit his partymen against Congress lawmakers in certain seats.

The formula used by the SP to offer Assembly seats to the Congress was also a sore point. The Samajwadi Party gave seats to Congress in places where they had either fared dismally in previous elections or where the Congress had won.

The two parties for long wanted to unite before the UP polls, the world's largest elections this year, in order to combat Indian Prime Minister Narendra Modi's party -- the Bharatiya Janata Party (BJP).

Meanwhile, WION has learnt that the Congress has readied its list of 350 candidates who they intend to field in the upcoming polls, which begin on February 11. The remaining seats will be given to other parties they have struck a partnership with. In total, Uttar Pradesh has 403 Assembly seats, which means that voters will elect 403 lawmakers in the state.

Congress leaders Rahul Gandhi and his sister Priyanka Vadra were personally involved in the dialogue with Samajwadi Party. But the cul-de-sac at the last moment has "outraged" the party, sources close to the Congress leadership said.

But later in the day, Congress president and Rahul's mother, Sonia Gandhi, stepped in to restore the near-collapse talks with the Samajwadi Party. Gandhi has asked her party's political secretary Ahmed Patel to renegotiate the tenets of the partnership.

Sonia Gandhi intervenes. Asks Ahmed Patel to salvage the alliance in UP. Let's see what happens now. It is a roller coaster now in UP.

Although it is doom and gloom in the Congress election war-room, party insiders hope that tomorrow's parlance will be more fruitful than today. Congress hopes that the old adage of a day being an eternity in the world of politics remains true because they remain keen on tying up the incumbent Samajwadi Party.

There remains a tiny window for the Congress to resume talks but SP leader Naresh Agarwal said the possibility of an alliance is "almost over".

In another news, Congress has named its candidates for the first phase of elections in Uttar Pradesh.