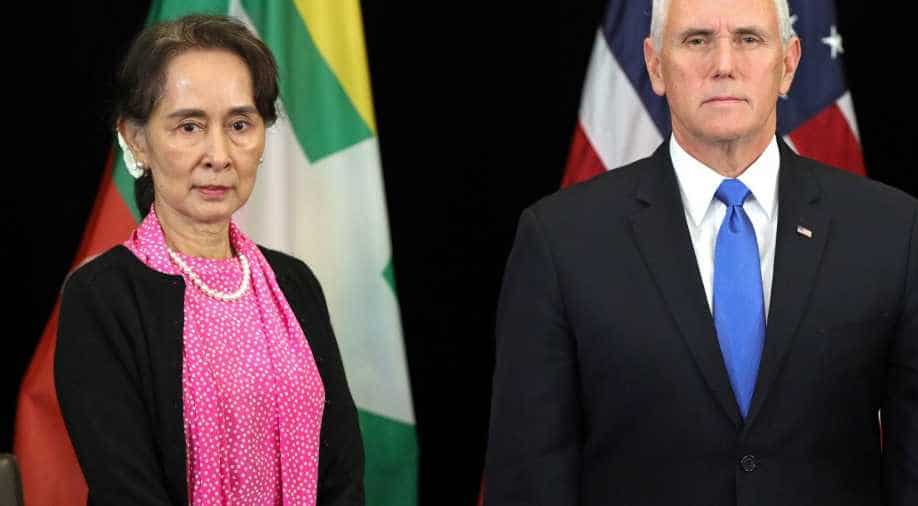 The lawmakers also called on President Donald Trump and Secretary of State Mike Pompeo on Monday, seeking support for Myanmar's ongoing transition to democracy and condemn any action taken by the government, political parties, military, or Union Election Commission to limit civil society participation in the election.

A bipartisan group of lawmakers have introduced a bicameral resolution in the US Congress, urging the Myanmar government to allow free, fair, transparent, participatory and credible elections in the country scheduled to be held in the month of November.

The lawmakers also called on President Donald Trump and Secretary of State Mike Pompeo on Monday, seeking support for Myanmar's ongoing transition to democracy and condemn any action taken by the government, political parties, military, or Union Election Commission to limit civil society participation in the election.

Introduced by Congressman Andy Levin and Steve Chabot, both of whom are members of the House of Foreign Affairs Committee, and other fellow Congressmen, the group also urged the Trump administration to ensure that the US-based social media companies, including Facebook, don't allow their platforms to be used as vehicles for spreading misinformation or advocating violence or voter intimidation to suppress voter participation.

In the Senate, the resolution was introduced by Senators Ben Cardin and Todd Young, members of the Senate Foreign Relations Committee.

The resolution also calls for the President to consider sanctioning individuals within the Government of Myanmar, the Tatmadaw, and among military associated businesses and ultranationalist groups, whom the US Government determines undermine free, fair, inclusive, transparent, participatory, and credible elections in Myanmar or the safety of such elections.

"Myanmar has experienced one of the most severe human rights atrocities in modern history. Now there is a concerted attempt to disenfranchise the Rohingya and other minority groups in Myanmar by shutting them out of the democratic process," said Cardin.

The US must stand in support of efforts for a more peaceful and democratic future for Myanmar in which all people's human rights are respected, he said.

Given the horrific human rights abuses that have occurred in Myanmar in recent years, it is critical that the Rohingya Muslim minority be included in the election process this November. The US supports efforts for a free, fair, inclusive, and transparent election said, Senator Young.

"Myanmar's 2015 general elections marked a significant turning point in the country's trajectory. Yet Myanmar's fledgeling democratic experiment, with the military still wielding so much control, has been wracked by tragedy, including the genocide of the Rohingya and ongoing abuses of ethnic minorities. Myanmar's upcoming elections in November are a critical opportunity to take a step toward a democracy where all citizens can be protected and enfranchised," said Engel.

Engel urged the Myanmar Government to do everything in its power to ensure free and fair elections, to enable the participation of all of Myanmar ethnic groups, and to act decisively to combat hate speech and political violence.

Congressman Levin said that the genocide of the Rohingya, the continued oppression of religious and ethnic minorities, the silencing of government critics and more have marred recent years.

"These elections represent a critical juncture. We urge the Myanmar government to hold free, fair, inclusive, transparent, participatory, and credible elections, and we urge our own president and State Department to work with us in support of a real democratic transition in Myanmar," he said.

"As a longtime advocate for democracy, human rights, and the rule of law in Myanmar, I believe that free and fair elections in Myanmar are a necessary step in the country's democratic transition," said Congressman Chabot.