Taking on militants: A fight for the soul of Pakistan 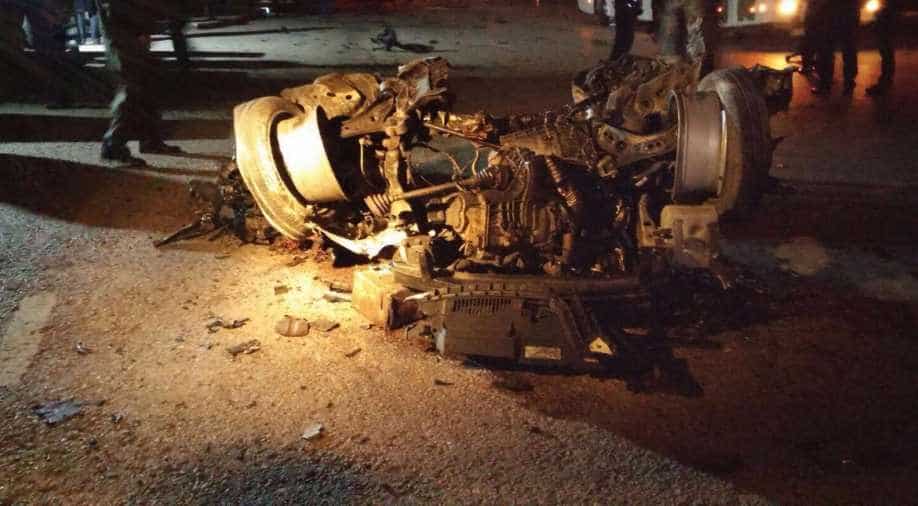 Pakistan is facing difficulty in coming to grips with domestic and regional political violence Photograph:( Others )

Two high-level meetings in recent months involving senior military commanders and intelligence officials and/or top-level government representatives spotlight Pakistan’s difficulty in coming to grips with domestic and regional political violence resulting from decades of support of militant Islamist and jihadist groups for foreign policy and ideological reasons. Overcoming those difficulties could determine Pakistan’s future, the nature of its society and its place in the world.

The first of those meeting was a gathering in August of Pakistani military commanders in the wake of a massive bombing in Quetta that killed some 70 people and wiped out a generation of lawyers in the province of Baluchistan. The commanders concluded that the attack constituted a sinister foreign-inspired plot that aimed to thwart their effort to root out political violence. Their analysis stroked with their selective military campaign aimed at confronting specific groups like the Pakistani Taliban and the Sunni-Muslim Lashkar-e-Jhangvi rather than any organisation that engages in political violence and targets minorities.

The commanders’ approach failed to acknowledge the real lesson of Quetta: decades of Pakistani military and intelligence support underwritten by funding from Saudi Arabia for sectarian and ultra-conservative groups and religious schools in Pakistan that have divided the country almost irreversibly. Generations of religious students have their critical faculties stymied by rote learning and curricula dominated by memorisation of exclusionary beliefs and prejudice resulting in bigotry and misogyny woven into the fabric of Pakistani society.

“The enemy within is not a fringe. … Large sections of society sympathise with these groups. They fund them, directly and indirectly. They provide them recruits. They reject the Constitution and the system. They don’t just live in the ‘bad lands’ but could be our neighbours. The forces have not only to operate in areas in the periphery, along with the Pakistan-Afghanistan border, but have also to operate in the cities where hundreds, perhaps thousands form sleeper cells, awaiting orders or planning to strike,” said Pakistani columnist Ejaz Haider in a recent commentary.

Top Pakistani political leaders echoed Haider’s sentiment in the second meeting in October that gathered the country’s civilian and military leadership around the table. Reporting in Dawn, Pakistan’s foremost English-language newspaper, on differences between the civilian and military components of the state, united politicians and officers in their denials of differences and prompted a government investigation into what it alleged was a false and inaccurate story.

Dawn, standing by the accuracy of its story, reported that Prime Minister Nawaz Sharif and other government ministers had warned their military and intelligence counterparts that key elements of the country’s two-year-old national action plan to eradicate political violence and sectarianism, including enforcing bans on designated groups, reforming madrassas and empowering the National Counter Terrorism Authority (NACTA) had not been implemented. The 20-point plan was adopted after militants had attacked a military school in Peshawar in December 2014, killing 141 people, including 132 students.

In a blunt statement during the meeting, Foreign Minister Aizaz Ahmad Chaudhry charged, according to Dawn, that Pakistan risked international isolation if it failed to crack down on militant groups, including Jaish-e-Mohammed, Lashkar-e-Taiba and the Haqqani network—all designated as terrorist groups by the United Nations (UN). Chaudhry noted that Pakistan’s closest ally, China, with its massive $46 billion investment in Pakistani infrastructure, continued to block UN sanctioning of Jaish-i-Mohammed leader Masood Azhar, but was increasingly questioning the wisdom of doing so.

The State Bank of Pakistan announced barely two weeks after the meeting that it was freezing the accounts of more than 2,000 people associated with political violence, including the leaders of anti-Shiite and anti-Ahmadi groups supported by Saudi Arabia and Pakistan’s military and intelligence agency. Not mentioned in the bank’s list of targeted people were those associated with groups such as Jamat-ud-Dawa, Jaish-e-Mohammad and Hizbul Mujahideen whose main focus is Kashmir.

Not mentioned in the bank’s list of targeted people were those associated with groups such as Jamat-ud-Dawa, Jaish-e-Mohammad and Hizbul Mujahideen whose main focus is Kashmir.

The absence of those groups signaled the military and intelligence’s ability to safeguard the fundamentals of their strategic support of militant groups and the inability of the civilian government to impose its will. The government moreover is divided with some ministers being more supportive of links to militants. And even if there were a unified will to crack down on militants, the bank’s measure would at best be a drop in a bucket. Most of the funds available to militant groups are either not in bank deposits or, if they are, not in accounts belonging to the groups’ leaders.

In many ways, Sharif’s effort to force the military and intelligence’s hand has a sense of déjà vu. A similar attempt by Sharif when he was prime minister in the late 1990s ended with his overthrow by a coup, initial imprisonment and ultimate exile for a decade. Sharif, in cohorts with his loyal intelligence chief, Lieutenant General Khawaja Ziauddin, tried to convince Taliban leader Mullah Omar to hand over Osama Bin Laden and stop Saudi-backed anti-Shiite militants of Sipah-e-Sabaha from attacking the minority in Pakistan from Afghan territory without consulting the military.

In response, Chief of Staff General Mohammed Aziz Khan and Islamist politician Fazl ur Rahman held separate talks with Omar in which they made clear to the Taliban leader who controlled the Pakistani levers of power and persuaded him to ignore Sharif’s request. Sharif’s effort was one reason for the 1999 military coup that led to his initial imprisonment and subsequent decade-long exile.

Leaders of Ahle Sunnat Wal Jamaat—the latest guise of Sipah after it was nominally banned—in a rare set of lengthy interviews prior to the bank’s announcement showed little compunction about detailing their close ties to Pakistani state institutions and Saudi Arabia. They were also happy to discuss the fact that both Pakistan and Saudi Arabia were pushing them to repackage their sectarian policies in a public-relations effort rather than a fundamental shift that would steer Pakistan toward a more tolerant, inclusive society.

“The Saudis sent huge amounts often through Pakistani tycoons who had a long-standing presence in Saudi Arabia as well as operations in the UK and Canada and maintained close relations with the Al Saud family and the Saudi business community. One of them gave 100 million rupees a year. We had so much money, it didn’t matter what things cost,” said a co-founder of Sipah.

Ahle Sunnat Wal Jamaat leader Ahmad Ludhyvani—a meticulously-dressed Muslim scholar whose accounts are among those blocked—speaking at his headquarters protected by Pakistani security forces in the city of Jhang, noted that Sipah, as the group is still commonly referred to, and Saudi Arabia both opposed Shiite Muslim proselytisation, even if Sipah served Pakistani rather than Saudi national interests.

“Some things are natural. It’s like when two Pakistanis meet abroad or someone from Jhang meets another person from Jhang in Karachi. It’s natural to be closest to the people with whom we have similarities … We are the biggest anti-Shia movement in Pakistan. We don’t see Saudi Arabia interfering in Pakistan,” Ludhyvani said over a lunch of chicken, vegetables and rice.

The soft-spoken politician defended his group’s efforts in Parliament to get a law passed that would uphold the dignity of the Prophet Mohammed and his companions. The law would effectively serve as a stepping stone for the institutionalisation of anti-Shiite sentiment much like a Saudi-inspired Pakistani constitutional amendment in 1974 that declared Ahmadis non-Muslim. As a result, all applicants for a Pakistani passport are forced to sign an anti-Ahmadi oath.

Sipah put Pakistani and Saudi support on public display when last year it hosted a dinner in Islamabad’s prestigious Marriot Hotel for Abdallah Ben Abdel Mohsen Al-Turki, a former Saudi religious affairs minister and general secretary of the Muslim World League, a major Saudi vehicle for the funding of ultra-conservative and militant groups. Hundreds of guests, including Pakistani ministers and religious leaders designated as terrorists by the United States, attended the event at the expense of the Saudi embassy in the Pakistani capital.

Hundreds of guests, including Pakistani ministers and religious leaders designated as terrorists by the United States, attended the event at the expense of the Saudi embassy in the Pakistani capital.

The corrosive impact of such support for groups preaching intolerance and sectarian hatred is mirrored in the recent controversy over the Council of Islamic Ideology—whose offices are ironically located on Islamabad’s Ataturk Avenue—that was created to ensure that Pakistani legislation complies with Islamic law. The council has condemned co-education in a country whose non-religious public education system fails to impose mandatory school attendance and produces uncritical minds similar to those emerging from thousands of madrasahs run by ultra-conservatives and those advocating jihadist thinking.

The council declared in 2014 that a man did not need his wife’s consent to marry a second, third or fourth wife and that DNA of a rape victim did not constitute conclusive evidence. This year, it defended the right of a husband to “lightly beat” his wife. It also forced the withdrawal of a proposal to ban child marriages, declaring the draft bill un-Islamic and blasphemous.

Continued official acquiescence and open support for intolerance, misogyny and sectarianism call into question the sincerity of government and military efforts to curb without exception intolerance and political violence. The result is a country whose social fabric and tradition of tolerance is being fundamentally altered in ways that could take a generation to reverse.

(This article was first published in Fair Observer)