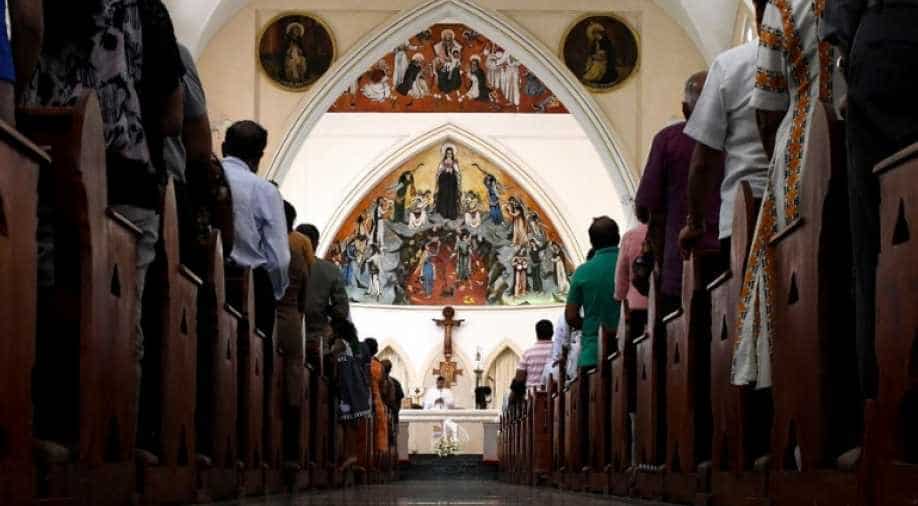 Sri Lankan Catholic devotees pray during a mass at the St. Theresa's church as the Catholic churches hold services again after the Easter attacks in Colombo. Photograph:( AFP )

The sprawling church car park was empty as the authorities did not allow any vehicles into the compound as part of high-level security.

The government has blamed local jihadists for the deadly April 21 bombings, which targeted three Christian churches and three luxury hotels.

Regular services were cancelled across all churches soon after the deadly suicide attacks, but the archbishop of Colombo Cardinal Malcolm Ranjith announced Thursday that mass would be held in his diocese from Sunday.

The Cardinal conducted private Sunday services in the past two weeks, which were broadcast live on national television.

He also said a special mass for the victims of the April 21 attack at the St. Lucia's cathedral on Saturday. The congregation was made up of relatives of victims and survivors of the Easter Sunday attacks.

At least 258 were killed and nearly 500 people were wounded.

Most churches outside Colombo had resumed regular services from last week, but under tight security provided by the local police.

But attendance has been low despite a raft of new security measures, including parking restrictions near schools.

The government has blamed a local group, the National Thowheeth Jama'ath (NTJ), for the bombings. The Islamic State group claimed responsibility and the bombers filmed themselves making a pledge of allegiance to the militants' elusive leader Abu Bakr al-Baghdadi before the attacks.

The authorities have banned the NTJ under new emergency laws that were invoked to deal with Islamists responsible for the attacks.

President Maithripala Sirisena has vowed to eliminate the militants and restore normality in the country which is still emerging from a 37-year Tamil separatist war that ended almost a decade ago.

Sri Lanka's police say they have either killed or arrested all those responsible for the bombings but that the threat of global terrorism persists.