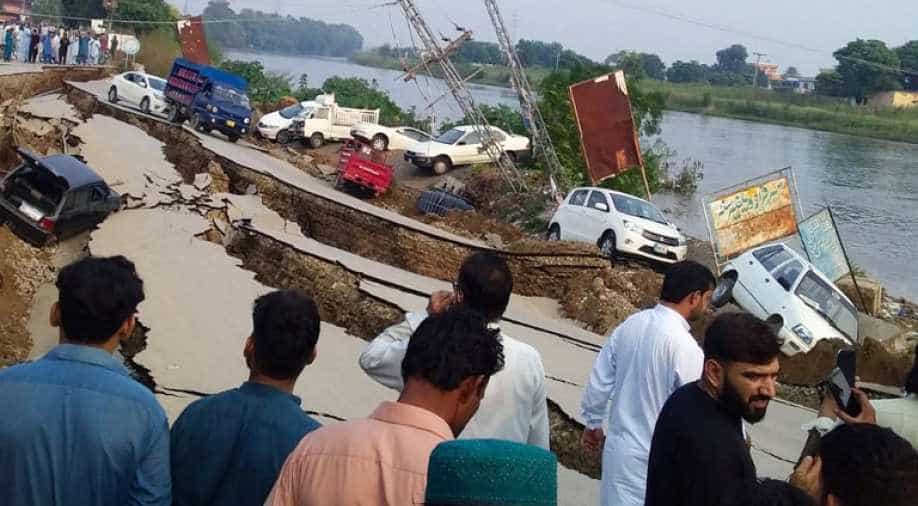 People gather near a damaged road after an earthquake of magnitude 5.8 in Mirpur, Pakistan September 24, 2019. Photograph:( Reuters )

The quake sent people in cities across the country running into the streets, as cars near the epicentre were wedged in between massive cracks that ripped apart roads while other vehicles were upended by the tremor

At least 19 people have been killed and 300 wounded after a shallow earthquake rattled north-eastern Pakistan, a senior police officer said, with the tremor tearing car-sized cracks into roads and heavily damaging infrastructure.

The quake sent people in cities across the country running into the streets, as cars near the epicentre were wedged in between massive cracks that ripped apart roads while other vehicles were upended by the tremor.

The epicentre of the 5.2-magnitude quake was near the city of Mirpur, roughly 20 kilometres (12 miles) north of Jhelum in agricultural Punjab province, according to data released by the US Geological Survey.

On one of the district's two main roads, AFP reporters could see cracks at least four feet deep, some filling with water from a nearby canal.

Ambulances could be seen, but Pakistani troops were preventing further travel. The military deployed "aviation and medical support" teams along with troops to affected areas, according to its spokesman.

Television footage showed cars trapped in some of the cracks, as well as a bus and a truck lying on their sides at the road's edge.

"At least 19 people have been killed and more than 300 wounded," said Sardar Gulfaraz, deputy inspector general of police in Mirpur, in televised comments.

However, the chairman of the National Disaster Management Authority gave a lower toll at a press conference in Islamabad.

"I can confirm 10 deaths and the number of wounded is 100," chairman Lieutenant General Mohammad Afzal said, adding that he had received reports of a higher toll.

"Things are under control," he said, adding that the nearby Mangla Dam, one of Pakistan's two main water reservoirs, was unaffected by the quake.

Witnesses Sajjad Jarral and Qazi Tahir, who spoke to AFP by telephone from Mirpur, said the quake had caused a building to collapse.

Mirpur, a city known for its palatial houses, has strong ties to Britain with the majority of its 450,000 residents carrying both British and Pakistani passports.

A spokeswoman at the British High Commission told AFP they were monitoring the reports, while the US embassy offered its sympathies to those affected via Twitter.

Tremors were felt as far as New Delhi, with the Press Trust of India reporting that panicked people rushed out of their homes and offices in several places, including in Rajasthan, Punjab, and Haryana.