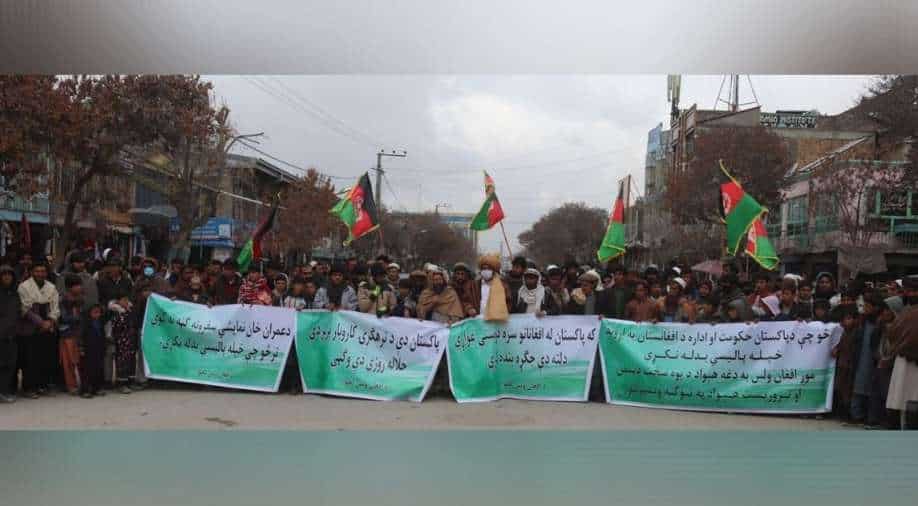 Terming Pakistan a "producer, sponsor and exporter of terrorism", scores of people on Thursday took to the streets of Kabul to protest against Pakistan Prime Minister Imran Khan`s maiden visit to Afghanistan.

The demonstrators were seen carrying banners and pamphlets denouncing Pakistan`s "hypocritic policy". They raised slogans against Pakistan and Khan.

One of the banners read: "Pakistan producer sponsor and exporter of terrorism". Similar protests were also reported in southeastern Paktia and Khost provinces against Khan`s visit.

Imran Khan arrived in Kabul on Thursday on his first official visit to meet with President Ashraf Ghani and other Afghan leaders to discuss the Afghan peace process and bilateral ties.

His visit comes at a time when the country is witnessing an escalation of violence despite ongoing talks between the Afghan government and Taliban in Doha.

Pakistan has been long blamed for abetting terrorists and creating instability in the war-torn nation. Though Islamabad has claimed that it supports peace in Afghanistan, experts believe Pakistan has backed the Taliban which has killed thousands of innocent civilians.

Experts have accused Pakistan of giving asylum to terrorists hiding from Afghan forces and sending fighters to support the Taliban.

According to a report by the United Nations Security Council (UNSC), around 6,500 Pakistan terrorists are operating in Afghanistan most of them belonging to the Tehrik-e-Taliban Pakistan (TTP).

The 26th report of the Analytical Support and Sanctions Monitoring Team concerning ISIS, al-Qaida and associated individuals and entities stated that the Tehrik-e-Taliban Pakistan (TTP), a "large terrorist group present in Afghanistan", has claimed responsibility for various high-profile attacks in Pakistan and has facilitated others by Jamaat-ul-Ahrar and Lahskhar-e-Islam, the report said.

Recently, a European think tank--European Foundation for South Asian Studies (EFSAS)-- in a report had said that Pakistan is involved in stoking the present escalation of Taliban violence in Afghanistan.

"If Pakistan possessed enough leverage over the Taliban to get it to the negotiating table with the US, it certainly should have the clout to get the Taliban to eschew violence at a time when such violence is threatening to tear apart the US-Taliban agreement that was consequently reached," the think tank reported.

The think tank also cited papers written by the US-based Council on Foreign Relations (CFR), which interestingly, touched upon Pakistan`s role in stoking instability in Afghanistan stated, "The Taliban`s Quetta Shura, or senior military leadership council, continues to reside in Pakistan, as do the Taliban's regional shuras that support the Afghan war... If Pakistan is unhelpful--or even counterproductive--in preventing stalled negotiations, the United States could consider suspending or terminating Pakistan`s non-North Atlantic Treaty Organisation (non-NATO) ally status, which offers military and financial advantages that generally are not available to non-NATO countries."