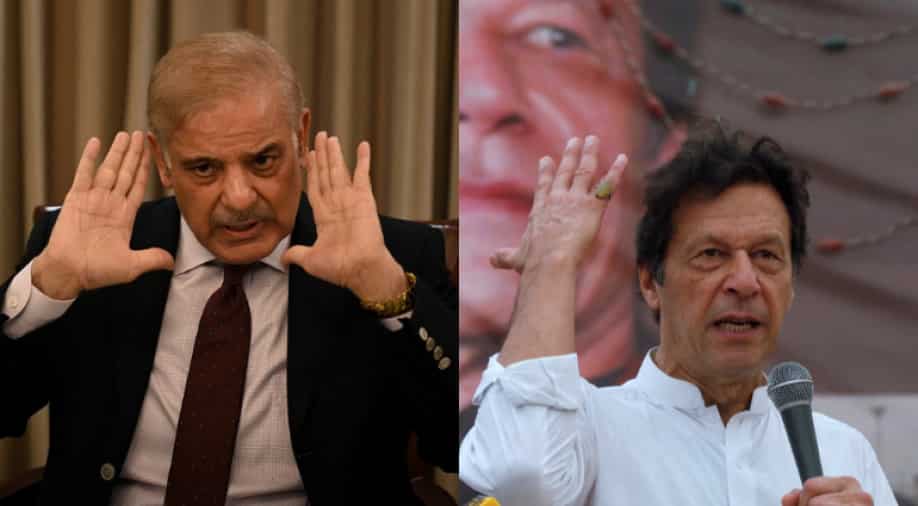 In this combination of file photos, Pakistani Prime Minister Shehbaz Sharif can be seen along with Imran Khan, the chairman of the Pakistan Tehreek-e-Insaf (PTI). Photograph:( Agencies )

Pakistani Prime Minister Shehbaz Sharif on Monday called his predecessor Imran Khan ''very dangerous and terrifying''. The 70-year-old has pledged to take legal action against him for mocking state institutions.

Sharif slammed Khan for planning to trigger a civil war in the country to fulfill his selfish interests.

It comes after Khan drew a comparison between his ouster to the betrayal faced by Tipu Sultan and Siraj ud Daula by collaborators of the East India Company, Mir Sadiq and Mir Jafar.

The chairman of the Pakistan Tehreek-e-Insaf (PTI) had said, “Our government was removed from power through the Mir Jafars and Mir Sadaqs of today.''

“He (Shehbaz) is a liar. He says that Imran Khan vilified the army. Tomorrow, I have a rally in Jhelum where I will give you (Shehbaz) an answer about the extent to which I was insulted and what you traitors did with the country,” he added.

In response, Sharif said “The venom he (Imran) spewed about the institution is a conspiracy against Pakistan. If this is not stopped through the law and the constitution, then, God forbid, this country will become a hideous reflection of Syria and Libya where cities present scenes of graveyards today.”

“You (Imran) were fine with this institution (Pakistan’s army) when it was feeding you like a baby... the support you got from it was unprecedented.”

“Without fear, I want to say that in 75 years, this institution has never supported any government or prime minister like it did Imran Khan. It was his misfortune that despite that, he learned nothing, did nothing and did not serve the nation. There is no example found of this kind of support and nor will it be found again,” he added.

According to Sharif, if even 20 per cent to 30 per cent of that support was provided to the PPP or PML-N governments then Pakistan’s fate would have been different.

He warned that if Khan's reckless comments are not curbed then Pakistan will face another serious crisis.

“The ambassador wrote in the letter that they used a threatening tone, but there was no mention of a conspiracy,” he said.

“We have a long history of threats (from the US). The former US secretary of state Henry Kissinger had threatened former prime minister Zulfikar Ali Bhutto whereas former president Gen Pervez Musharraf was also threatened by the US after 9/11, but I am failing to understand where this conspiracy came from this threat to Imran Khan,” Sharif added.