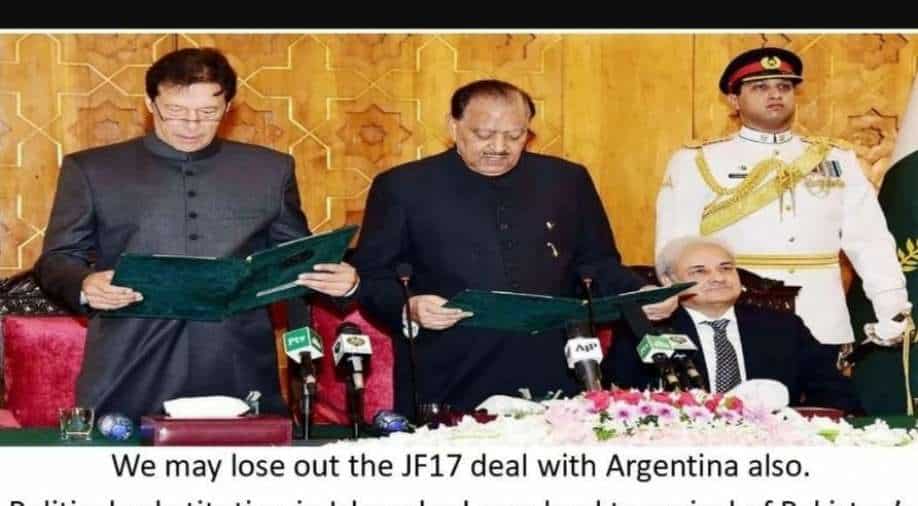 JF17 fighter jets have been jointly developed by Pakistan and China and have been used by Pakistan's Air Force. Myanmar and Nigeria have also ordered the JF17 jets.

Pakistan's mission in Argentina on its Instagram page has posted a cryptic message and blamed the Imran Khan government calling for "political substitution in Islamabad".

The message by a verified account said: "We may lose out the JF17 deal with Argentina also. The political substitution in Islamabad may lead to the revival of Pakistan’s reliability & credibility. Diplomats can’t be ‘la raison’ for failures".

Please note that all messages being passed through this account are not from the Embassy of Pakistan in Argentina.

JF17 fighter jets have been jointly developed by Pakistan and China and has been used by Pakistan's Air Force. Myanmar and Nigeria have also ordered the JF17 jets.

The development comes days after the Twitter account of Pakistan's embassy in Serbia criticised the Imran Khan government.

The tweet, which was later deleted said, "With inflation breaking all previous records, how long do you expect @ImranKhanPTI that we government official will remain silent and keep working for you without been paid for past three months and our children been forced out of school due to non-payment of fees. Is this #NayaPakistan?"

The tweet had a video embedded with the song "Aap ne ghabrana nahi", a phrase used by Pakistani PM in the past.  Pakistan's foreign ministry later issued a statement and said that the account was hacked.