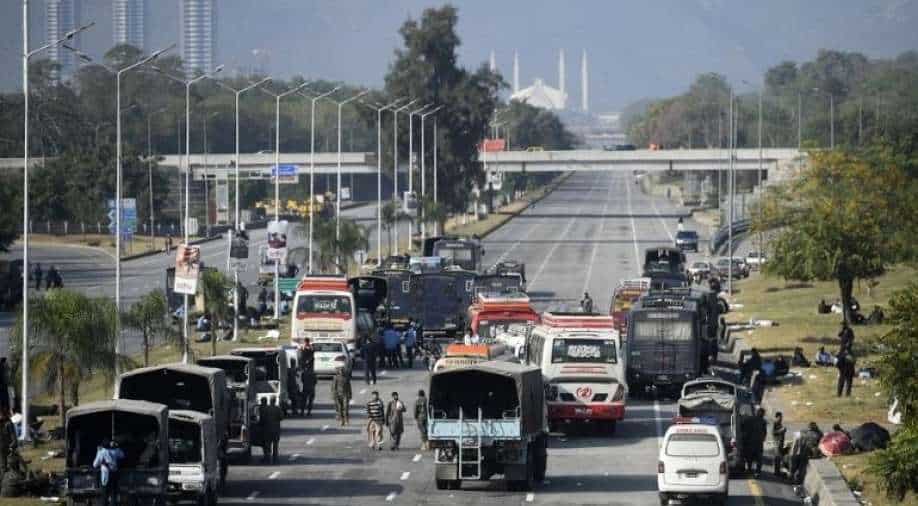 In Rawalpindi, about 5,000 people participated in the protests and thousands found roadblock preventing them from entering the capital

Thousands took to streets in Pakistan on Monday as far-right protests against France continued, forcing authorities to shut down a major road leading to Islamabad for a second day.

Several supporters of hardline Tehreek-i-Labbaik Pakistan (TLP) on Sunday marched from Liaquat Bagh Rawalpindi to Faizabad in Islamabad to demonstrate against the publication of Prophet Muhamad's cartoons in France.

In Rawalpindi, about 5,000 people participated in the protests and thousands found roadblock preventing them from entering the capital.

People in Islamabad faced long delays at alternative routes into the city as they were crowded.

After more than 24 hours, mobile phone services were restored around lunchtime on Monday.

Pakistan has seen small but scattered protests in the last few weeks over French President Emmanuel Macron's recent remarks on Islam and publication of Prophet's cartoons in the country.

Macron lashed out at Islamic extremists post the beheading of a French teacher, saying he was killed "because Islamists want our future".

Several Muslim countries have protested against Macron's remarks and Prophet's cartoons with some even boycotting French goods.

Pakistan has filed a complaint with France over what it described a "systematic Islamophobic campaign" in the nation.