Cauvery's significance stems from its role in irrigation, providing water for consumption and in generating electricity Photograph:( Others )

The key problem of the Cauvery basin is the demand exceeds the availability of water. The Cauvery river drains an area of 81,155 sq.km, passing through the south Indian states of Karnataka, Tamil Nadu, Kerala and the union territory of Puducherry. There is an immediate need that, India develops a transparent, participatory, democratic, and rule-based management of Cauvery river water to meet the regional demand.

Unfortunately, the Cauvery Water Disputes Tribunal (CWDT) award of February 2007 is yet to be implemented; the Special Leave Petitions of Karnataka and Tamil Nadu, admitted in the Supreme Court, remain pending for over nine years now. The Supreme Court, in the meantime, deals with the issue in ad hoc manner, as was apparent through its orders of September 5 and 12 of this year.

At the heart of this situation is the refusal on the part of the states of Karnataka and Tamil Nadu, union ministry of water resources, union ministry of agriculture, the central water commission and the Indian judiciary to work towards changing the unsustainable water-intensive cropping pattern. Both Karnataka and Tamil Nadu - in growing sugarcane and paddy - put extensive pressure on the water resource of the region. There are multiple ways of reducing the amount of water used, including for agriculture, which includes better cropping patterns, use of water efficient methods, increasing soil moisture retention capacity and rainwater harvesting, among others.

The CWDT award has, unfortunately, not helped to solve the Cauvery dispute for various reasons. Firstly, the Tribunal depended on insufficient data on rainfall in the region. Secondly, if 50 per cent availability of water is ensured in a year, the Tribunal has decided to declare it a “normal” water year in the Cauvery region. This is in spite of the fact that many other tribunals and most irrigation projects in India are based on 75 per cent water dependability.

Moreover, even as it is increasingly clear that groundwater is and will remain India’s water lifeline in the foreseeable future, the region continues to lack accountability in groundwater usage. It is already known to the experts that increased use of groundwater has a direct impact on the surface water availability in the downstream areas in the Cauvery basin. And yet the CWDT award does not take into account the groundwater use at all.

In a recent report, the Central Water Commission (CWC) shows that from 1971 to 2004, rainfall in the Cauvery basin has been constantly declining. Moreover, as recent researches by the Indian Institute of Science show, the water flow in the Cauvery river is also displaying a declining trend, primarily, as an impact of the climate change. A recent analysis of rainfall data of coffee growers in Kodagu district of the upper Cauvery basin shows that number of rainy days are on a decline too. Evidently, forestry practices are changing for the worse in the Cauvery catchment area, which contributes the maximum amount of water to the Krishna Raj Sagar reservoir.

The biggest lacuna in the CWDT award is the absence of specific formula for water sharing in distress years. That absence was supposed to be taken care of by the Cauvery Management Board (CMB) as the CWDT award recommended. But the CMB is yet to be formed.

So in the absence of CMB, the Supreme Court of India, through another order in May 2013, asked for the creation of a Supervisory Committee (SC) as an interim measure. The SC was expected to decide the issue of water sharing during distress years. So, when Tamil Nadu went to the Supreme Court in August this year, one expected the Court to refer the matter to the SC and ask, why is the SC not doing what is expected of it.

Instead, on Sept 5, 2016, the Supreme Court directed Karnataka to release 15000 cusecs (cubic feet per second) water for ten days, amounting to approximately 13 TMC (thousand million cubic feet). The apex court order mentions that Karnataka has already offered to release 10,000 cusecs (for 6 days) but Tamil Nadu demanded the release of 20, 000 cusecs. Thus, the Supreme Court decided on 15,000 cusecs as the middle ground, being the mean of the two figures.

But can water be released based on such arithmetic balancing act?

The reality is, through Sept 19, 2016, the Cauvery basin has 26 per cent rainfall deficit as per the Indian Meteorological Department. Whereas Tamil Nadu has 11 per cent rainfall deficit, indicating a higher deficit in the upstream at Karnataka. According to the latest weekly reservoir-level bulletin of September 15, 2016, the water storages in the four main reservoirs in Karnataka is 0.853 BCM (billion cubic meters) compared to 1.451 BCM in the Tamil Nadu reservoirs.  Moreover, though Tamil Nadu does not get much rainfall from the south west monsoon, it receives much better average rain in the following north east monsoon. Karnataka, however, does not benefit from the second monsoon at all. Lastly, as was mentioned in the Supreme Court order of Sept 12, 2016, the outflow from Mettur dam in Tamil Nadu was about 1250 cusecs, and it already had over one BCM of water in live storage which could have been used, if necessary, for any emergency needs of the Tamil Nadu farmers.

Considering all these factors, the situation could have been more sensitively handled. The apex court could have asked Karnataka to release 10,000 cusecs that it already agreed to. In the meantime, the SC could have deliberated over the next course of action. This might have been a more prudent course of action, considering water is such an emotive issue in the Cauvery basin.

There is no doubt that the Karnataka government and the political leadership should not have allowed the massive damage to public property, and should have taken a proactive step against any such eventuality.

On Sept 19, 2016, the Cauvery Supervisory Committee recommended 3000 cusecs of water be released by Karnataka between September 21 - 30. However, the latest news is, the Supreme Court instead directed Karnataka on September 20 to release 6, 000 cusecs water till the next date of hearing, which is Sept 27, 2016. The logic behind this enhanced release from the apex court is still awaited. However, this overruling of the decision of the SC by the apex court does not help to increase confidence in the expert body that the Supervisory Committee is.

The Supreme Courts have also asked the Union of India on Sept 20, 2016, to constitute the Cauvery Management Board within four weeks, as required by CWDT award.

In fact, the Supervisory Committee should have pro-actively decided about the releases, being aware of the rainfall deficit in the Cauvery basin this year. The Committee also needs to make public all information related to its functioning, including all the information and submissions available to it, the minutes and agenda of its meetings and also its decisions. We hope the Cauvery Management Board, which the apex court has now directed to be constituted as per the CWDT award, will function in a transparent and proactive manner.

CMB is meant to be elaborate, but an engineering dominated mechanism. According to the specifications of the CWDT award, CMB is under the control of the Union Ministry of Water Resources, with a chairperson and a full-time member who have to be irrigation engineers; the second full-time member has to be an agriculture expert. In addition, each state of Karnataka, Tamil Nadu, Kerala and Puducherry need to appoint an irrigation engineer as a part-time member. Unfortunately, this engineering dominated Board do not seem to have the right constitution to tackle Cauvery Basin Water Management issues in the 21st Century.

In conclusion, as Vishwanath of Bangalore, a famous zen rainman says, if there is a will, there is a lot that could be done to arrive at solutions. It will avoid the violence Karnataka has seen this monsoon. In Cauvery basin itself, the Cauvery family experiment saw farmers of both states coming together with experts and academics to find a shared solution. They worked together for better cropping patterns and adopting water efficient methods. The trouble is, there is little sign that the Union Government, the state governments or the judiciary have the will to reach a solution that is just, sustainable and real. The solutions, it seems, need to come from elsewhere! 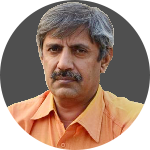