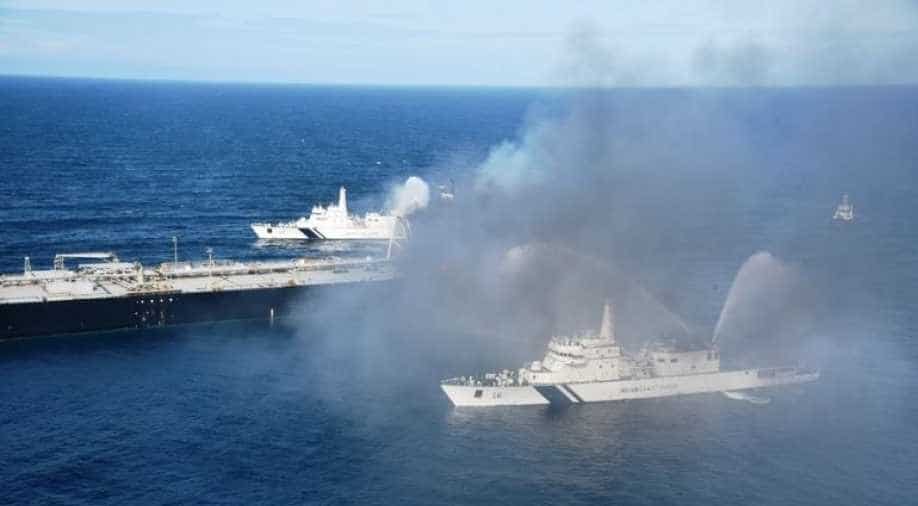 The Indian Coast Guard (ICG) is continuing fire-fighting operation east of Sri Lanka on Motor Tanker New Diamond which is a Greek-owned vessel and under charter by Indian Oil Cooperation.

The vessel has been ablaze since September 03 afternoon, following a major explosion in the engine room, while transiting Sri Lanka’s Exclusive Economic Zone. The first information about the vessel being on fire was received at Indian Coast Guard Maritime Rescue Co-ordination Centre (MRCC) Mumbai.

ICG Fast Patrol Vessel (FPV) Ameya with 1,000 liters oil spill dispersant, arrived at the area, on Saturday evening to augment pollution response efforts. Another FPV Abheek with 40 drums (200 kg each) aqueous film forming foam concentrate (AFFF), 10 units of DCP (50 Kg each) and 20 barrels (50 kg each) of dry chemical powder (DCP) had also joined in. Owing to intense and continuous fire-fighting, the fire has been localised at Port Bridge Deck and Aft Ready Use tank area.

Indian Coast Guard has deployed six vessels and two aircraft for fire fighting and to handle pollution response in event of an oil slick. ICG Ships Sujay, Shaurya and Sarang are on scene since Thursday and are continuously engaged in fire fighting operation using specialized external fire fighting system along with Sri Lankan ships/tugs. The operations are being carried out with the advice of Master of the MT New Diamond.

Emergency Towing Vessels from Mumbai and Chennai have been sailed for augmenting Salvage and Fire Fighting efforts. No oil spill has been so far reported.Continuous liaison and co-ordination is being maintained with Sri Lankan Navy/Coast Guard and other authorities for augmentation and effective response.