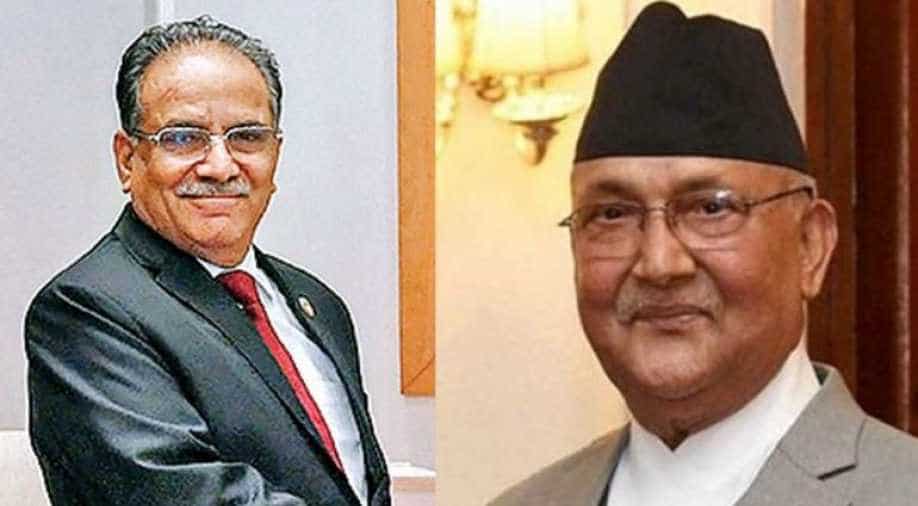 During the meeting, Oli requested Prachanda to "walk separately", according to the party spokesperson, Narayan Kaji Shrestha.

The speculation surrounding the split intensified after-party Secretary-General Bishnu Poudel tweeted on Sunday that the party "is facing a serious existential crisis, and confronting serious crisis".

Also, during meetings on Saturday and Sunday, Prachanda also briefed leaders close to him that PM Oli had requested him to "walk separately".

After the disagreement deepened in the party, after a hiatus, Oli and Prachanda had met on Saturday.

During the meeting, Oli requested Prachanda to "walk separately", according to the party spokesperson, Narayan Kaji Shrestha.

"It has been very difficult to work and walk together so let`s be separated," Shrestha told reporters quoting Prachanda, adding: "We are trying our best to save the party unity after the Prime Minister offered the split."

After ties between Oli and Prachanda worsened, Poudel on Sunday wrote on Twitter that the "unified existence of the NCP has witnessed a serious crisis".

"I request all party leaders, cadres and comrades to stand in favour of party unity," Poudel, who is also the Finance Minister, said.

On July, 30 out of 44 standing committee members had sought the resignation of the Prime Minister but later he managed to resolve the differences with Prachanda after both leaders reached an agreement on power-sharing.

Oli and Prachanda have had several differences over party functioning in the past.

Oli`s monopoly over the government`s functioning, unilateral decisions made by the government without discussions inside the party are among some of the reasons behind the differences that surfaced since the last two years.

The two communist parties led by Oli and Prachanda jointly contested the elections and later merged the party in May 2018.

Prachanda, however, said that Oli`s "unilateral" moves despite agreeing to take decisions on the basis of consultation and consensus, has created deep trouble in the party.

He said that the current situation in the party arose because of Oli who refused to abide by the party`s decisions.