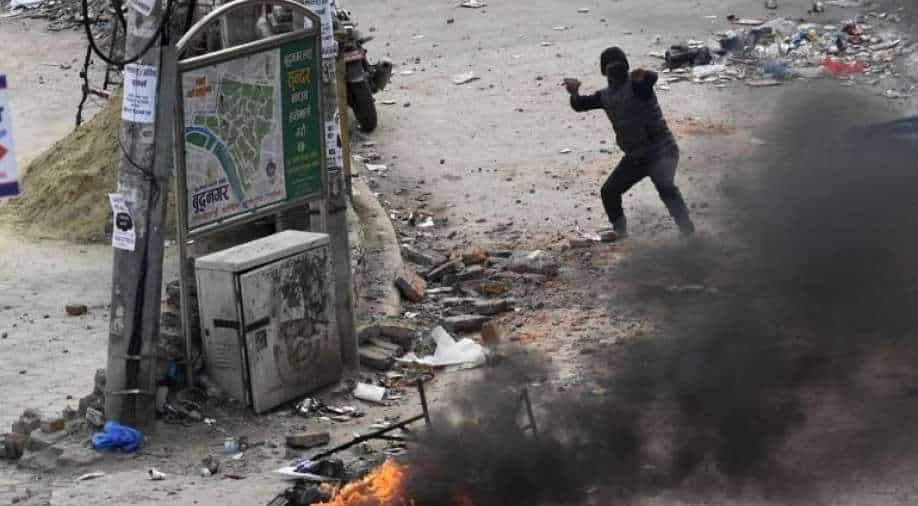 Demonstrators throw stones at police during a protest against the proposed grant agreement from America under the Millennium Challenge Corporation (MCC), in Kathmandu. Photograph:( AFP )

Following Prime Minister Sher Bahadur Deuba's continuous efforts to ratify the compact in the parliament, a large-scale protest is being held in the capital, Kathmandu

Nepal’s House of Representatives on Friday was for the second time postponed to hold a discussion on the contentious USD 500 million Millennium Corporation Challenge (MCC) programme as the ruling alliance failed to reach a consensus on the endorsement of the US-funded grant assistance.

The session will be held on February 27, as per the parliament secretariat.

It was tabled in the lower house of Parliament on February 20 for ratification amid protests against it from some political parties. The US government has set February 28 as the deadline to endorse the grant project from Parliament.

Following Prime Minister Sher Bahadur Deuba's continuous efforts to ratify the compact in the parliament, a large-scale protest is being held in the capital, Kathmandu.

Prime Minister Deuba has intensified his meetings with ruling leaders, including the opposition.

Once again, the same demands were reiterated by Oli including the resignation of Speaker Agni Prasad Sapkota or the expulsion of 14 lawmakers, including Madhav Kumar Nepal.

A Speaker can be removed by a two-thirds majority of the House, and it will need 181 votes, which the Congress (61) and UML (97) lack. So, they need the support of other parties.

It can be seen Deuba and Oli are trying to reach a deal to ratify the compact, for which the Prime Minister is under immense pressure from the US. However, there hasn’t been any concrete output of the meetings yet.

Later, ruling party CPN-Maoist Centre Chair Pushpa Kamal Dahal held talks with Oli in an attempt to convince the UML Chair to oppose the MCC compact in the House.

Major political parties, including those in the ruling coalition, are divided over whether to accept the US grant, which has yet to be ratified by parliament.

Prime Minister Deuba is keen on saving the alliance and is once again holding a meeting on Friday with ruling leaders-- Dahal, Madhav Kumar Nepal and Upendra Yadav opposing the compact.

Meanwhile, hundreds of anti-MCC protesters broke through barricades and clashed with police. Police have used teargas, water cannon, and batons to stop the protesters.

The grant from the MCC does not need to be repaid and Washington says it comes without conditions.

But opponents, many wary of US influence in the region, say the aid would undermine Nepal's laws and sovereignty, as it would not have sufficient oversight over the projects.

The U.S. Embassy in Nepal says the grant would be "a gift from the American people and a partnership between our nations" that would bring jobs and infrastructure and improve the lives of some of the world's poorest people.