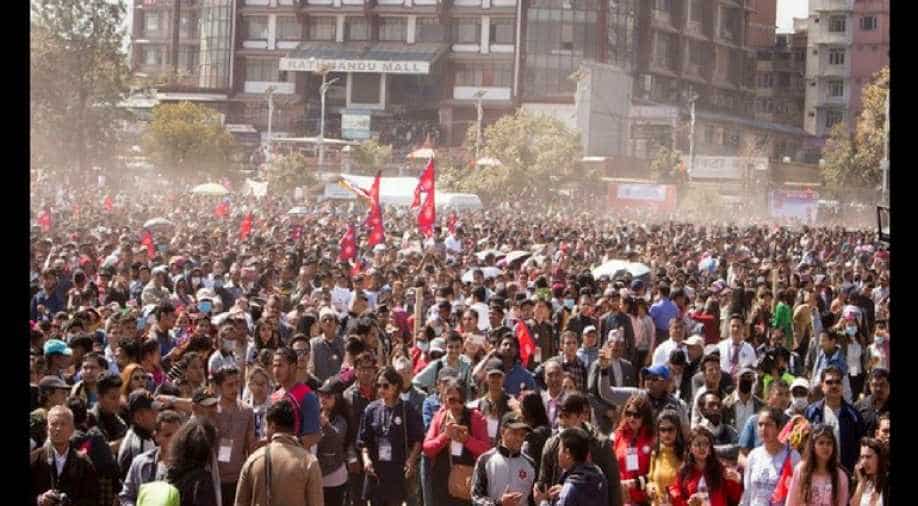 The official declaration of the record is yet to be done. Photograph:( ANI )

Nepal has made a record attempt on Saturday, taking over India, in the category of 'Most People Reading Aloud Simultaneously- Single Location'.

A total of 75,000 people had gathered to recite Dhammapada, the preachings by Lord Buddha, at an event in Kathmandu's Tundikhel.

The official declaration of the record is yet to be done.

The event was inaugurated by the Prime Minister of Nepal Khadga Prasad Oli, who appealed to the citizens of Nepal to spread love and affection and opt for the method of dialogue to resolve conflicts.

He said, "Nepal is the birthplace of Lord Buddha, the country which has the height like of Sagarmatha (Mount Everest) let's make it peaceful. We have adopted the path of prosperity let's make it that way. Let's make it happiest country in the world. I want to make a request with the world, the world leaders, the world's government and all organisations to search for the solutions through dialogue or through peaceful way if problems exist not the war".

Nepal did this exercise in an attempt to mark itself for the event of "Most People Reading Aloud Simultaneously- Single Location" as part of the Guinness World Records. It further wanted to promote Nepal as the birthplace of Lord Buddha with the slogan "Buddha was born in Nepal".

Currently, this title is being held by India after making the record at an event organized by the Art of Living Foundation on February 2, 2014.

As part of the event, a total of 46,660 participants had gathered at the Vadakkunnathan Temple at Thrissur in Kerala to recite Njanappana, a poem written by 16th Century poet Poonthanam whose motive was to promote peace and non-violence in the area.