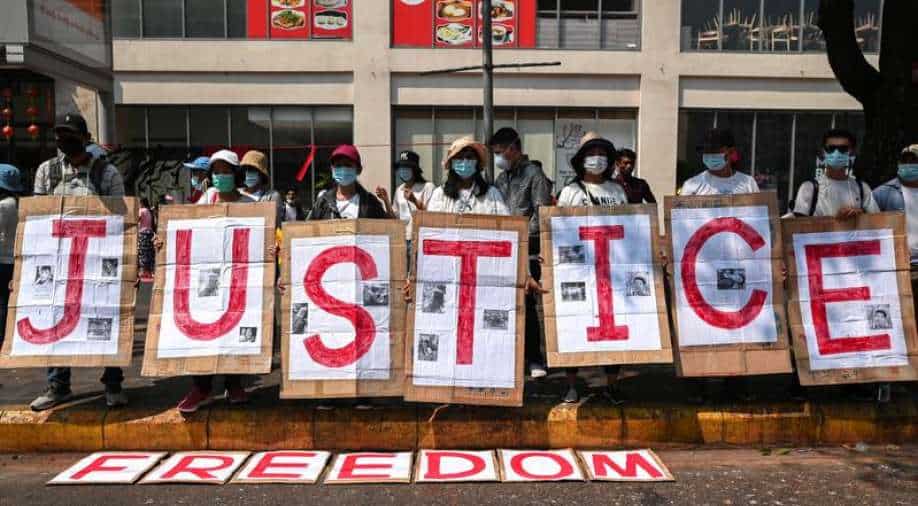 People hold placards to form the word "Justice" during a protest against the military coup in Yangon Photograph:( Reuters )

More than 200 people have been killed since Nobel peace laureate Aung San Suu Kyi was overthrown in a February 1 coup, triggering mass protests that security forces have struggled to suppress with increasingly violent tactics.

Human rights groups say the use of artificial intelligence (AI) to check on citizens' movements poses a "serious threat" to their liberty.

More than 200 people have been killed since Nobel peace laureate Suu Kyi was overthrown in a February 1 coup, triggering mass protests that security forces have struggled to suppress with increasingly violent tactics.

Security forces have focussed on stamping out dissent in cities including the capital Naypyitaw, Yangon and Mandalay, where hundreds of CCTV cameras had been installed as part of a drive to improve governance and curb crime.

Also, Human Rights Watch has expressed its "heightened concern" over cameras armed with AI technology that can scan faces and vehicle licence plates in public places, and alert authorities to those on a wanted list.

Most of the equipment used in Safe City, a project to curb crime in big cities, is from Chinese technology firm Huawei, the Myanmar Now publication had reported.

Huawei told Human Rights Watch it was providing "standard ICT infrastructure equipment" - information and communications technology, and that the facial and licence-plate recognition technology on the cameras was not from Huawei.

Suu Kyi is now detained at an undisclosed location while facing accusations of bribery and other crimes which could see her banned from politics and jailed if convicted. Her lawyer says the charges are trumped up.

Western countries have condemned the military coup and called for an end to the violence and for Suu Kyi's release. Asian neighbours have offered to help find a solution, but Myanmar's military has shown no sign of seeking reconciliation.

During the meeting, the head of Indonesia's armed forces, Hadi Tjahjanto, expressed concern over the situation in Myanmar, the Indonesian military said on its website. Indonesia's army ruled for years but later completely withdrew from politics.

Indonesia had led diplomatic efforts in Southeast Asia to resolve the crisis but a March 3 regional meeting it helped coordinate failed to make headway.

Indonesian President Joko Widodo also on Friday called for democracy to be restored and violence to be halted in Myanmar and for Southeast Asian leaders to hold a high-level meeting to discuss the situation there.

"I will immediately call the Sultan of Brunei Darussalam as head of ASEAN to as soon as possible hold a high-level ASEAN meeting to discuss the crisis in Myanmar," he said in a virtual address.

Brunei is currently chair of the 10-member Association of Southeast Asian Nations (ASEAN).

All this has instigatd ousted Myanmar lawmakers into exploring whether the International Criminal Court (ICC) can investigate any crimes against humanity committed since the military coup, as an activist group said three more people had died in clashes with security forces.

The total number killed in weeks of unrest has risen to at least 224, the Assistance Association for Political Prisoners activist group said, noting another death in the commercial hub of Yangon and two in the cities of Monywa and Bago on Thursday.

Myanmar's UN envoy, who publically broke with the junta, said a committee of ousted lawmakers was looking at ways people can be held accountable for violence following the coup.

Also read | 'I too kneel,' says Pope Francis about Myanmar nun who tried to stop violence

Police in Yangon were forcing people to clear protesters' barricades on Friday, residents said, while demonstrators were out in the second city of Mandalay, the central towns of Aungban and Myingyan and the eastern town of Myawaddy, posts on social media showed.

Police fired tear gas in Aungban and there was also a confrontation in Myawaddy but no reports of any casualties.

Hundreds have fled towns and cities since the coup and are sheltering in areas controlled by ethnic minority militias on the Thai border, an official from one group said.

People have also crossed the western border into India.