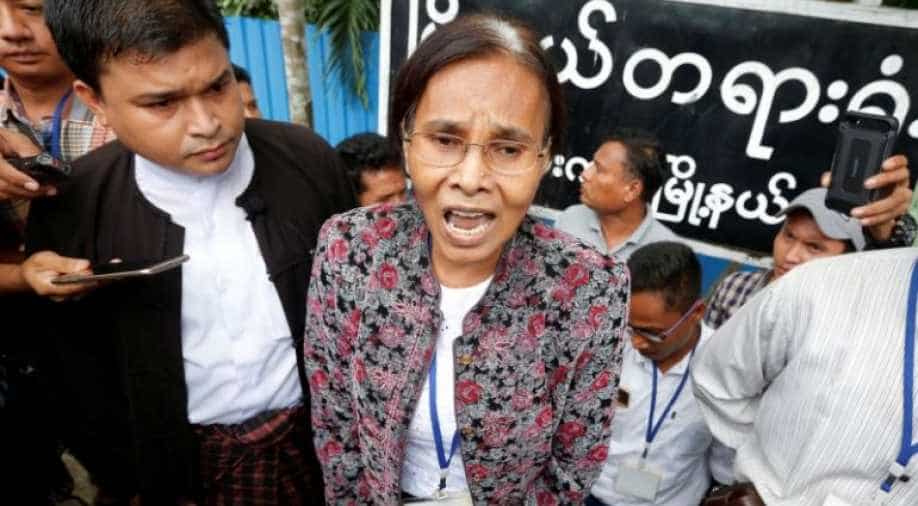 Ohn Thin, the mother of Hein Zaw, the arrested Arakanese Association-Singapore chairperson, speaks to the media outside of Mayangon court. Photograph:( Reuters )

The five men and one woman were arrested in Singapore in early July and later deported to Myanmar, where they were arrested shortly after arriving.

Six Myanmar nationals deported from Singapore over alleged links to an ethnic minority insurgent group were remanded in custody in Yangon on Friday, a court spokesman said, as relatives of the accused said they were being held incommunicado.

"We issued another remand this morning for them," Min Thant, an information officer at the Western District Court in the commercial capital of Yangon, told Reuters by telephone, without giving further details.

The five men and one woman were arrested in Singapore in early July and later deported to Myanmar, where they were arrested shortly after arriving.

They are being held in an undisclosed location along with two other people including a driver, according to relatives and a lawyer.

Authorities in Myanmar have declined to provide details about the case or give the whereabouts of the detainees.

Singapore’s home ministry said the group, members of the Rakhine Buddhist minority, had "organised and mobilised" some members of the Myanmar community in Singapore to support the Arakan Army (AA), an insurgent group fighting for greater autonomy in Rakhine and Chin states, and its political wing, the United League of Arakan.

Rakhine State, also known as Arakan, came to global attention after about 730,000 Rohingya Muslims crossed from there into Bangladesh, fleeing a military crackdown in response to Rohingya militant attacks in 2017.

More recently, civilians there have been caught up in clashes between the military and the AA, which recruits mostly from Rakhine Buddhists, the majority community in Rakhine State.

The latest clashes have displaced more than 35,000 people this year according to the United Nations.

Yanghee Lee, the UN special rapporteur on human rights in Myanmar, said last month that both sides may be committing war crimes during the conflict, citing reports of deaths during interrogations.

Myo Thu Soe, a spokesman for the Myanmar police, did not answer calls seeking comment about the detained group.

Previously, he told Reuters he did not know why authorities in Singapore had detained them.

Their relatives and the lawyer said they had been unable to meet them since they were taken into custody. On Friday, family members were waiting with journalists at one court, only to hear later the suspects had appeared briefly at another one.

"The accused have rights including the right to prove they are innocent and for a fair trial," said the lawyer, Kyaw Myo Tun.

Ohn Thin, the mother of one of the detained men, said the last she had heard from him was a phone call in which he said, "Mom, I am coming back."

"I didn’t get a chance to meet him, at the airport or up to now," she said. "The officials haven’t told us anything about them. I feel very sad as a mother."

Myanmar nationals demonstrated outside the Singapore embassies in Tokyo and Washington last week protesting against the deportations. Some carried placards accusing Singapore of "selling Arakanese to the Myanmar army".

Singapore said at the time people involved in "activities of security concern" would be deported.

The Myanmar army has battled various autonomy-seeking ethnic minority insurgent groups for decades but several have agreed to peace in recent years.

But fighting has flared in Kachin State in the north and in Rakhine State.