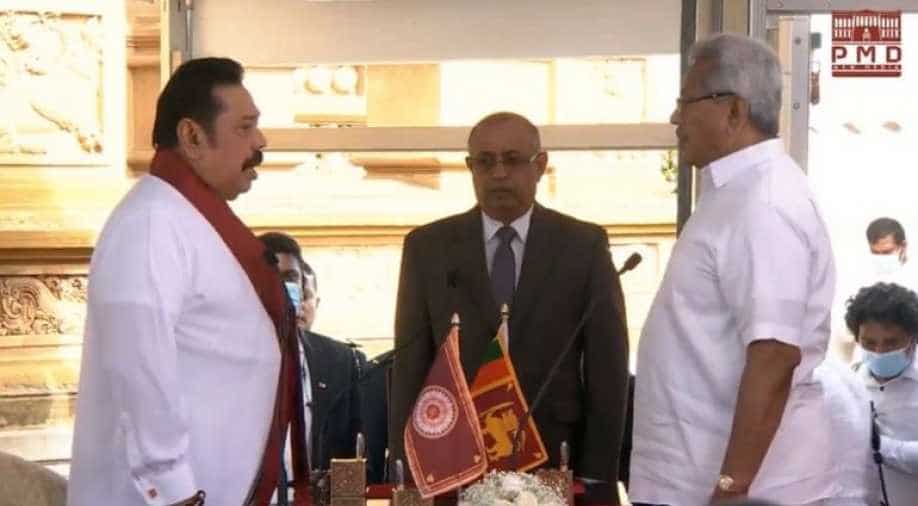 The 74-year-old Sri Lanka People’s Party (SLPP) leader was administered the oath of office for the ninth Parliament by his younger brother and President Gotabaya Rajapaksa.

Sri Lanka’s former president Mahinda Rajapaka was sworn in on Sunday as the country’s new prime minister at a historic Buddhist temple, days after his party won a landslide victory in the General Election.

The 74-year-old Sri Lanka People’s Party (SLPP) leader was administered the oath of office for the ninth Parliament by his younger brother and President Gotabaya Rajapaksa at the sacred Rajamaha Viharaya in Kelaniya, a north Colombo suburb.

Mahinda Rajapaksa completed 50 years of parliamentary politics in July this year. He was elected as a Member of Parliament at the young age of 24 in 1970. He has since been elected President twice and has been appointed Prime Minister thrice.

The SLPP, led by Mahinda Rajapaksa, registered a landslide victory in the August 5 general election, securing two-thirds majority in Parliament needed to amend the Constitution to further consolidate the powerful Rajapaksa family's grip on power.

Mahinda Rajapaksa polled over 500,000 individual preference votes -- the highest ever recorded by a candidate in the history of elections.

Watch the live streaming of the swearing in ceremony of the new PM @PresRajapaksa at Kelaniya Raja Maha Viharaya from below link https://t.co/NKuf1CVT1L

The SLPP won in 145 constituencies, bagging a total of 150 seats with its allies, a two-thirds majority in the 225-member Parliament.

The cabinet ministers, state and deputy ministers are expected to be sworn-in on Monday.

The Rajapaksa family -- including SLPP founder and its National Organiser 69-year-old Basil Rajapaksa, who is the younger brother of Gotabaya Rajapaksa, 71, and Mahinda Rajapaksa -- has dominated Sri Lankan politics for two decades.

Mahinda Rajapaksa previously served as the president for nearly a decade from 2005 to 2015.

President Gotabaya Rajapaksa had won the November presidential election on the SLPP ticket.

In the parliamentary election, he was seeking 150 seats mandatory to execute constitutional changes, including to repeal the 19th Amendment to the Constitution which had curbed the presidential powers while strengthening the role of Parliament.

Activists, already alarmed by the diminishing space for dissent and criticism in the island nation, fear such a move could lead to authoritarianism.

The biggest casualty from the election outcome was the United National Party (UNP) of former prime minister Ranil Wickremesinghe which managed to win only one seat. The country''s grand old party failed to win a single seat from any of the 22 districts.

UNP leader and four-time prime minister Wikremesinghe was unseated for the first time since he entered Parliament in 1977.