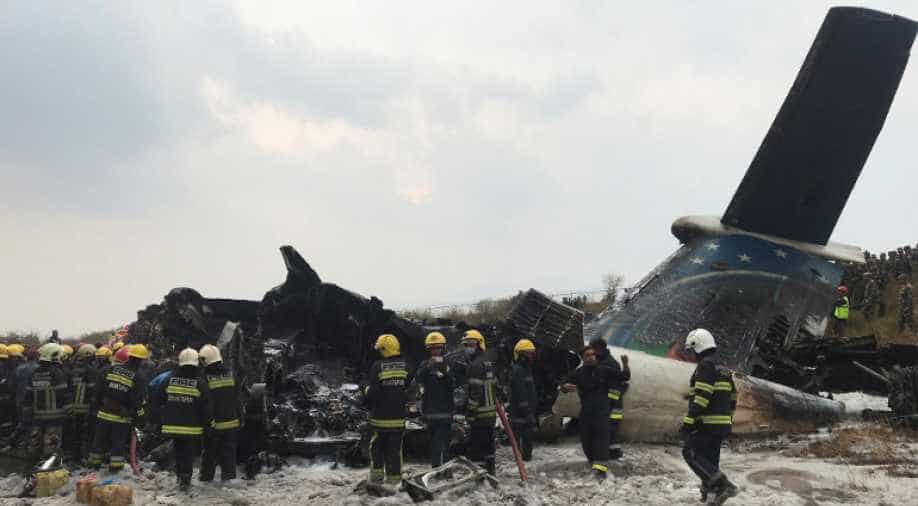 The wreckage of the plane is seen as rescue workers begin operations. Photograph:( Reuters )

Basanta Bohora, a Nepalese and one of the few passengers to escape with injuries in the deadly plane crash in Kathmandu said he is lucky to be alive.

At least 50 people were killed when a Bangladeshi plane crashed and burst into flames while landing at Kathmandu airport.

Officials said there were 71 people on board the US-Bangla Airlines plane coming from Dhaka.

Bohora, an employee of Raswita International Travels and Tours, recalled that the take-off was normal from Dhaka but when the plane approached the Tribhuvan International Airport (TIA) for landing in Kathmandu, the aircraft began to behave strangely.

"There were 16 Nepalese from various travel agencies onboard the airplane," he was quoted as saying by Kathmandu Post.

All the 16 had gone to Bangladesh for training, he said.

"All of a sudden the plane shook violently and there was a loud bang afterwards," he said.

"I was seated near the window and was able to break out of the window," he said.

"I have received injuries to my head and legs but I am fortunate that I survived the ordeal," he said.

He is currently receiving treatment at Thapathali-based Norvic Hospital.

"I have no recollection after I got out of the plane, someone took me to Sinamangal hospital and from there my friends brought me to Norvic," he said.