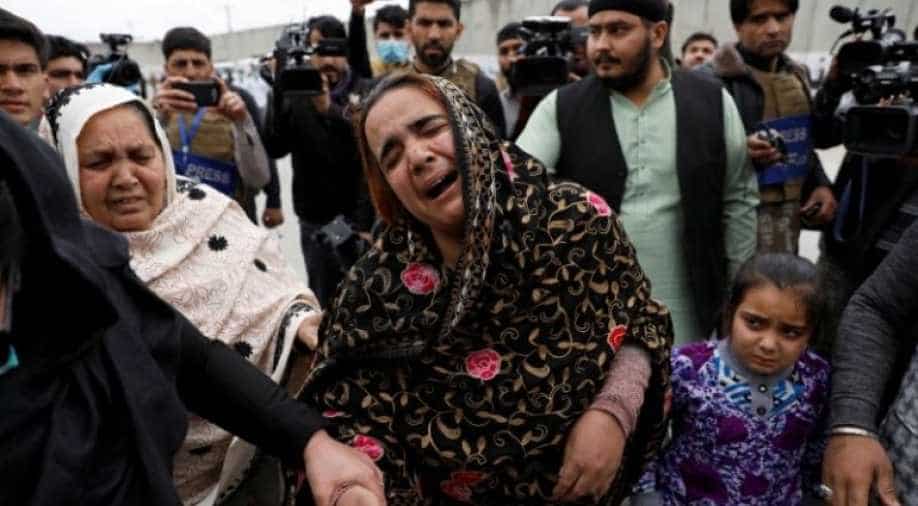 An Afghan Sikh woman mourns for her relatives near the site of an attack in Kabul, Afghanistan March 25, 2020. Photograph:( Reuters )

Responding to India's move, Congressman Jim Costa said in a tweet, "This marks an important step toward protecting Afghanistan's Sikh and Hindu communities from imminent destruction at the hands of terrorists."

An influential American congressman has praised India for giving refugee status to Sikhs and Hindus from Afghanistan and urged the Trump administration to do the same for the persecuted religious minorities from the war-torn country.

The Ministry of External Affairs said on Thursday that there has been a recent spurt of attacks on Hindus and Sikhs in Afghanistan by terrorists at the behest of their "external supporters" and India has been providing necessary visas to members of these communities who want to come.

"We have been receiving requests from the members of these communities. They want to move to India, they want to settle down here, and despite the ongoing COVID situation, we are facilitating these requests," MEA spokesperson Anurag Srivastava said.

He said once those who want to come and settle in India arrive in the country, their requests will be examined and acted upon based on existing rules and policies.

Responding to India's move, Congressman Jim Costa said in a tweet, "This marks an important step toward protecting Afghanistan's Sikh and Hindu communities from imminent destruction at the hands of terrorists."

"While I'm pleased that India has offered them refuge, more needs to be done to ensure their safety in the long term. I will continue to advocate for more permanent solutions that will provide these families with security, economic stability, and a brighter future," Mr Costa said as he referred to a news story from The New York Times.

In April the lawmaker had written a letter to Secretary of State Mike Pompeo seeking similar refugee status for Hindus and Sikhs from Afghanistan.

"In April, I wrote to Secretary of State Pompeo urging him to provide help to these families and consideration for potential resettlement in the US," Mr Costa tweeted.

In its news story, The New York Times reported the statement of Ministry of External Affairs that India has decided to facilitate the return to India of Afghan Hindu and Sikh community members facing security threats in Afghanistan.

According to the daily, the Hindu and Sikh communities in Afghanistan once numbered in the tens, if not the hundreds, of thousands, with well-established businesses and high-ranking positions in the government. But nearly all have fled to India, Europe, or North America over decades of war and persecution.

Last month, a bipartisan group of 20 US senators urged the Trump administration to grant emergency refugee protection to Sikh and Hindu communities in Afghanistan facing persecution as religious minorities.

"Sikh and Hindu communities in Afghanistan face an existential threat from ISIS-K because of their religion. To protect religious freedom, we urgently ask that you take these essential steps to defend these threatened religious minorities," they said in the letter.

The Sikhs and Hindus once numbered around 250,000, but now fewer than 1,000 people live in Afghanistan due to decades of persecution, they added, the senators wrote.

A heavily armed ISIS-Khorasan (ISIS-K) suicide bomber attacked a gurdwara in the heart of Afghanistan's capital on March 25, killing 25 Sikhs and injuring eight others.