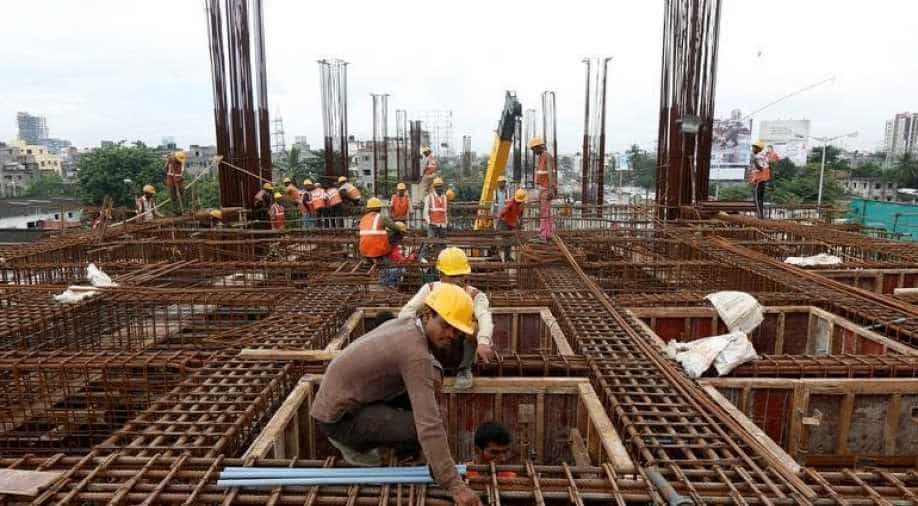 Over the last quarter, growth is expected to remain balanced across sectors, the report said. Photograph:( Reuters )

The Indian government on Friday forecast a slowdown in the country's GDP growth to to 7.1 per cent in 2016-17, from 7.6 per cent last year. The government data released today attributed the lower growth rate mainly to a slump in manufacturing, mining and construction sectors.

In a break from departure, the estimates are based on data of seven months till October without taking into account "volatile" figures post post-demonetisation in the months of November and December.

Chief Statistician TCA Anant, who released the data compiled by the Central Statistics Office (CSO), said the figures for November were available and examined but "it was felt in view of the policy of denotification of notes there is a high degree of volatility in these figures and conscious decision was taken not make projection using the November figures."

Until last year, the government's statisticians would wait for GDP data for the quarter through December before putting out full-year estimates. This year December quarter figures will not be available before the end of February, making the projection largely reliant on the economy's performance in the period before demonetisation, when consumer demand was strong, Reuters reported.

The CSO will release the demonetisation data on February 28, along with revised full-year growth estimates.

The CSO also said projections on national income are now in line with estimates of India's central bank, Reserve Bank of India, which too has lowered the GDP growth prospects to 7.1 per cent. "Anticipated growth of real  Gross Value Added (GVA) at basic prices in 2016-17 is 7 per cent against 7.2 per cent in 2015-16," the CSO said.

Most private economists have pegged India's growth forecast to 6.3 per cent to 6.4 per cent for 2016-17 fiscal year, citing the impact of the demonetisation, Reuters reports. They estimate that the impact of demonetisation of Rs 500 and Rs 1000 notes, which came into effect from November 8, would linger for one more year.

Aneesh srivastava, chief investment officer, IDBI Federal Life Insurance company told Reuters, "I am very worried with the projected growth rate. The methodology followed excludes demonetisation, but still the projected rate of 7.1 per cent is below my estimate of 7.5 per cent.

"Since the dollar is strengthening and global dynamics are not in our favour, I expect RBI to cut rate by 25 bps as early as February."

Varun Khandelwal, managing director, Bullero Capital, told Reuters, "Based on statistical measures, it is very difficult to factor in the impact on demonetisation. Mostly the impact of demonetisation will be proportionally higher in micro, smaller and medium scale enterprises.

"For FY17 our growth estimate range is lower at 5.5-6.5 per cent and this will depend on the future course of policy actions, the time taken for cash to come back into the system and what kind of budget we have."
Friday's GDP estimate is a vital input for Finance Minister Arun Jaitley's budget on February 1.