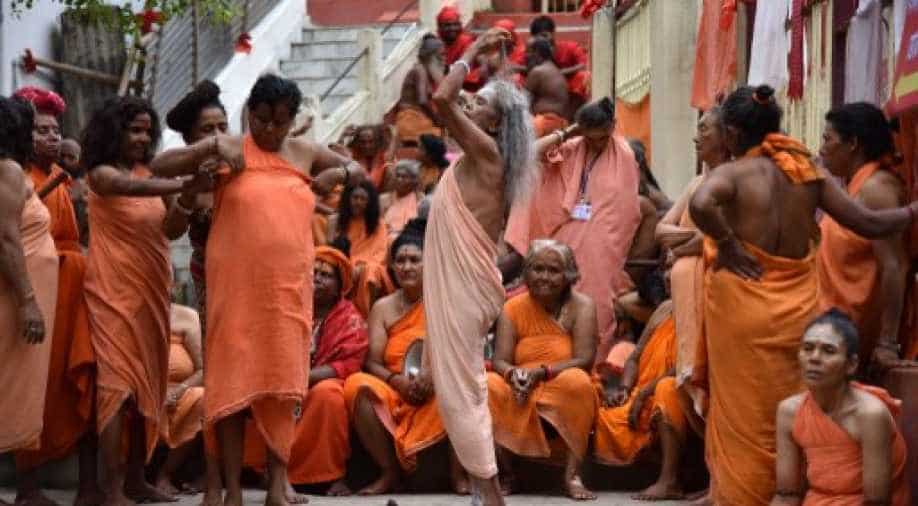 Indian 'sadhvis' - holy women - get ready on the eve of the annual Ambubachi festival at the Kamakhya temple in Guwahati on June 21, 2015. (Representative Image) Photograph:( AFP )

Self-proclaimed Indian god-woman Sadhvi Deva Thakur, who fired gun shots in the air at a wedding in India's northern state of Haryana on Tuesday, today surrendered to a magistrate court.

The shots killed the groom's aunt and critically injured three relatives after which Sadhvi was on the run for three days.

Media reports state that a video shows her first firing from a revolver and then a double-barrelled gun.

Other reports said Thakur had apparently walked up to the dance floor, asked the DJ to play the song of her choice, began dancing and then shooting.

She reportedly paid no heed to the pleas of both the bride's and groom's families and continued firing until the 50-year-old aunt collapsed and three others were injured.

Thakur and her six guards escaped following the chaos. A case of murder was registered against the seven.

Thakur, 27, has been remanded in police custody for five days while her guards are still absconding.

"I am innocent. I didn't do anything wrong. It's a conspiracy against me," a BBC report quotes her as saying. "I'm very sad that someone died at that event," she added.

Thakur, vice-president of a fringe Hindu organisation, the All India Hindu Mahasabha, has been in the news earlier too - for saying that Muslims and Christians must undergo sterilisation to restrict their growing populations and that Hindu women must have more children to counter the threat of becoming a minority religion in their own country.

English daily DNA has also quoted her as saying that idols of Hindu gods and goddesses should be placed in mosques and churches and a statue of Nathuram Godse, the assassin of Mahatma Gandhi, should be installed in Haryana.

Thakur, born in Bras, a small village in Karnal district, set up an ashram in her village a few years ago, reports said.

She is known to dress in saffron robes and wear gold jewellery.