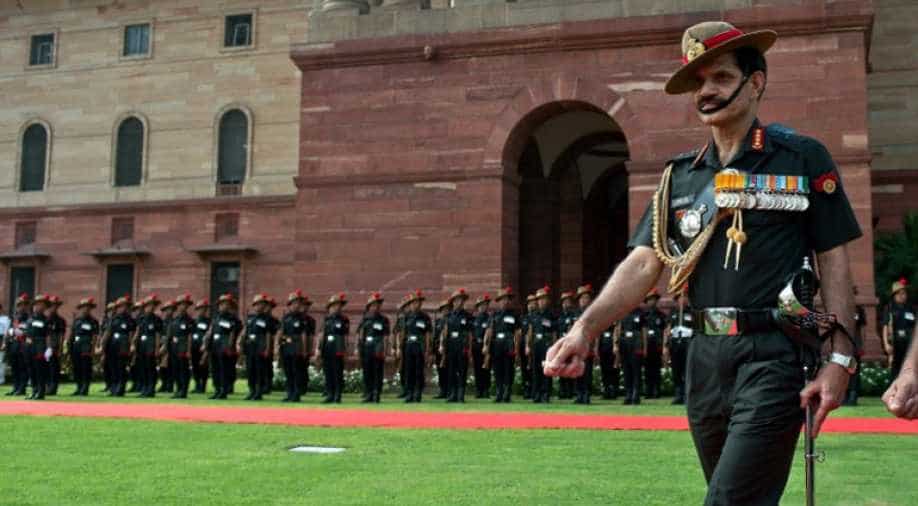 The blockade came up after the Manipur govt announced the formation of seven new districts. The Nagas say two of those districts will snatch their ancestral lands from them. In photo: General Suhag. Photograph:( AFP )

Indian Army chief General Dalbir Singh Suhag is in Manipur to review the security situation in the state, amidst the ongoing economic blockade by the United Naga Council.

Minister of state for Home Kiren Rijiju visited the state yesterday to take stock of the situation. He was accompanied by joint secretary Satyendra Garg and other officials from the central government.

On Saturday, the blockade entered its 45th day

"The meeting was positive. Centre will provide all kinds of help to the state so that there is a smooth flow of essential commodities, which have been stranded due to the ongoing economic blockade. People of Manipur should not suffer because of the blockade," Rijiju had said after the meeting.

So far, some 8,000 central paramilitary forces personnel have been deployed in the state. CRPF personnel are also escorting trucks carrying essential supplies on the Imphal-Silchar highway.

This force deployment by the central government has come in the wake of violent clashes last Sunday in Imphal East district when the Meiteis clashed with the Nagas. The Meiteis -- protesting against the ongoing blockade of two highways and the recent killing of three policemen -- torched as many as 22 vehicles on the Imphal-Ukhrul Road.

An indefinite curfew -- which was lifted for a day on Saturday -- was imposed following the clashes.

The blockade has cut Manipur off completely, since most supplies enter the state on those two highways.

The UNC put up the blockade after the Manipur government announced the formation of seven new districts, taking the total number of districts in the state to 16.

The Nagas allege two of the new districts -- Kangpokpi and Jiribam -- will snatch their ancestral lands away from them.

The Imphal valley is inhabited by the Meiteis, the hills by the Nagas.

Meanwhile, internet services have been suspended till December 25 in the violence-hit areas to prevent any further flaring up of tension.