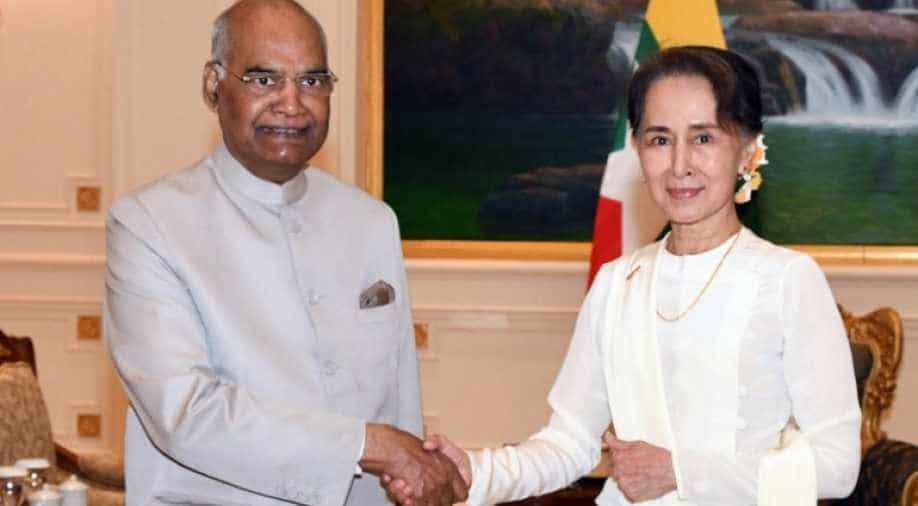 Kovind, who arrived here on Monday on a five-day visit, received a military guard of honour at the Presidential Palace.

Acknowledging that Myanmar is going through a "challenging time", India on Tuesday pledged full support to its national peace process and the country's quest for better connectivity during President Ram Nath Kovind's wide-ranging talks with his counterpart U Win Myint and State Counsellor Aung San Suu Kyi.

Kovind, who arrived here on Monday on a five-day visit, received a military guard of honour at the Presidential Palace.

He held wide-ranging discussions with his counterpart.

"President Kovind led delegation-level talks with President U Win Myint of Myanmar. The President said that India attaches special priority to its relations with Myanmar. Myanmar is a key partner for India's 'Act East' and 'Neighbourhood First' policies," the president's office tweeted.

The two leaders witnessed the signing of two MoU/Programme of Cooperation between two countries in the area of judicial training and science and technology.

India is building 250 houses in Myanmar's Rakhine province as part of a developmental project. The first batch of 50 houses was formally handed over to the Myanmar authorities on Tuesday.

India signed a development programme for Rakhine State in Myanmar late last year which was designed to assist the Myanmar government in Rakhine State to build housing infrastructure for return of displaced persons.

More than 700,000 minority Rohingya Muslims have fled Myanmar's Rakhine state since August 2017 after a military crackdown.

"The President said that India deeply appreciates the reforms underway in Myanmar. We understand that this is a particularly challenging time for Myanmar. India is in full support of the objectives of the National Peace Process," the president's office said.

"Coinciding with President Kovind's visit, and to further people-to-people relations, Myanmar has also announced a visa-on-arrival facility for Indian tourists entering the country through the international airports of Nay Pyi Taw, Yangon and Mandalay," it said.

The President said that residents of India's Northeast region have particularly welcomed and are beginning to reap the benefits of the Land-border Crossing Agreement concluded recently.

The landmark Land Border Crossing Agreement between India and Myanmar signed on May 11, 2018, has been brought into effect in August with the simultaneous opening of international entry-exit checkpoints at the Tamu-Moreh and the Rihkhawdar-Zowkhawtar border between the two nations.

"They look forward to the early conclusion of the Motor Vehicles Agreement," Kovind said.

President Kovind's Myanmar visit comes amid China's foray into the southeast Asian country with which it has signed a mega port deal.

China last month clinched the multi-billion-dollar deal to build a port at a strategic Kyaukpyu town along the coast of the Bay of Bengal in Myanmar, its third project in India's neighbourhood after Sri Lanka and Pakistan.

The president will visit the Advanced Centre for Agricultural Research and Education and the Rice Bio-park, both of which have been funded with Indian assistance on December 12, Gokhale said.

Kovind and the First Lady will travel to Yangoon and lay wreath at the Martyrs Mausoleum, where Gen Aung San, father of Aung San Suu Kyi rests, on the same day. They will also visit the Shwedagon Pagoda.
The president will also interact with the surviving veterans of the Indian National Army (INA).

On December 13, the president will visit the Shri Kali Temple and also the 'mazhar' (shrine) of Bahadur Shah Zafar, the last Mughal Emperor who was exiled to Myanmar and died in Yangoon.