In Myanmar, Cambodian PM met with a red-carpet welcome and chants of 'We don't need you' 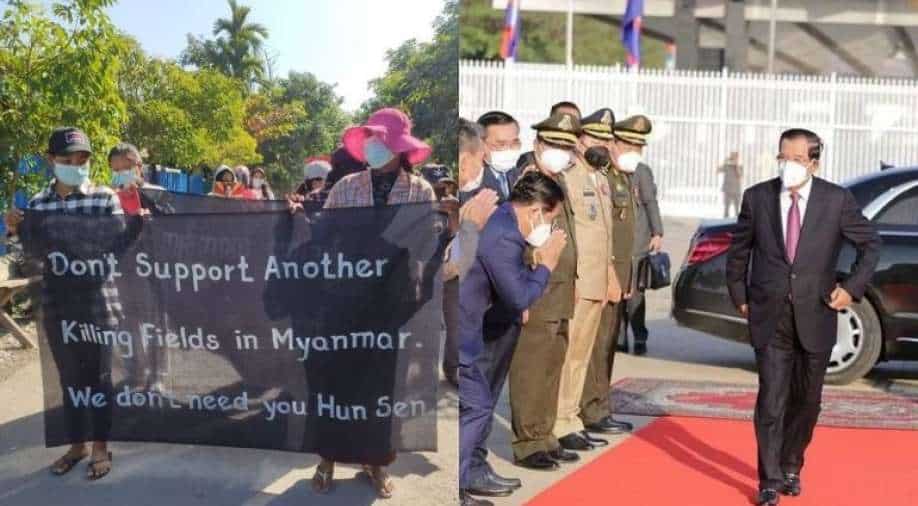 Cambodian Prime Minister Hun Sen arrived in Myanmar on Friday to an honour guard and red carpet. His visit prompted protests by coup opponents in other parts of the country over fears the visit will grant the military junta more legitimacy.

Myanmar's army overthrew Aung San Suu Kyi's elected government on February 1 last year, triggering months of protests and bloodshed. The Cambodian PM's two-day visit is the first by a government official to the country since the military overthrew the government.

Currently, Cambodia chairs the Association of Southeast Asian Nations (ASEAN), which has been trying to broker a peace deal in Myanmar and which adopted a five-point "consensus" peace plan in April.

The junta's failure to implement the plan has enraged some ASEAN nations, including Indonesia.

Many opponents of military rule in Myanmar have claimed that Hun Sen is supporting the junta by making the trip.

As @hunsencambodia, Prime Minister of Cambodia touched down in Myanmar, Australia Myanmar diaspora community & Cambodia community staged protests in front of the embassy of Myanmar and Cambodia in Canberra. #2022Jan7Coup #WhatsHappeningInMyanmar pic.twitter.com/UMa1dgMr3z

Further protests were reported in the second city of Mandalay, as well as in the regions of Tanintharyi and Monywa.

In a speech on Wednesday, Hun Sen urged everyone in Myanmar to exercise restraint and follow the peace plan.

"Brothers in Myanmar, do you want your country to fall into a real civil war or want it solved?" he said.

After a phone call with Hun Sen this week, Indonesian President Joko Widodo said in a Twitter message that only non-political representatives from Myanmar should be invited to ASEAN meetings if there is no significant progress on the peace plan.

For failing to comply with ASEAN's demands, his failure to cease hostilities, allow humanitarian access and start a dialogue, as agreed with ASEAN, junta leader Min Aung Hlaing was barred from attending the ASEAN summit in October.

Hun Sen, however, in a further sign of division within ASEAN, said junta officials should be allowed to attend ASEAN meetings.

Hun Sen is one of the world's longest-serving leaders and Western countries and human rights organisations have long condemned him for crackdowns on opposition figures, civil rights organizations, and the media.

He will meet with military leader Min Aung Hlaing. However, the U.S.-funded Radio Free Asia reported, citing a junta spokesman that he would not meet with Aung San Suu Kyi, who has been detained since the coup. Suu Kyi is on trial, facing nearly a dozen charges that carry combined maximum sentences of more than 100 years.