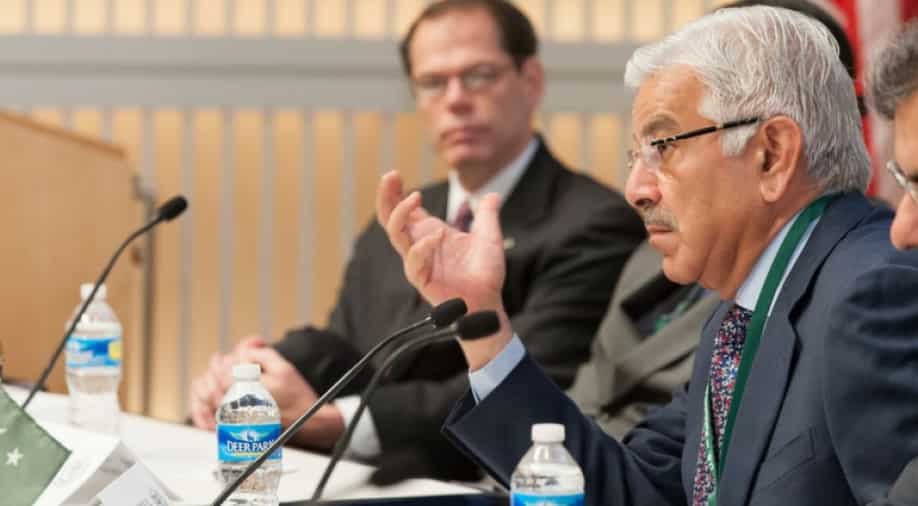 Asif said that Islamabad cannot be held responsible for the tensions in Afghanistan, claiming that peace cannot be established only through the strategy applied by the US and would require negotiated settlement. (Image source: Wikimedia Commons) Photograph:( Others )

In a chain of tweets, Khan claimed that Dawn Leaks was a “deliberate attempt by PMLN” to target Pakistan’s military. He further alleged that the “Sharifs and their cronies” were desperate to appease Indo-US lobby.

Now evident that DawnLeaks was a deliberate attempt by PMLN to target Pak mly at a time when it is fighting our enemies on multiple fronts pic.twitter.com/pp9ecmNbEU

Sharifs & their cronies desperate to appease Indo-US lobby & interests as their loot/properties all stashed away in West. https://t.co/LJiX6eEoHx

Their continuous targeting of our armed forces continues today as part of this Indo-US appeasement. No concern for Pak lives sacrificed https://t.co/RaqQAMx9PS

Kh Asif's comments of ownership of militant gps coming from a Foreign Min undermining Pak security. With such a FM, who needs enemies? https://t.co/2fAqxMUHYh

Pakistan's foreign minister Khawaja Asif, in an attempt to clarify Pakitan's position, asked the international community to stop accusing the country of the presence of Haqqani Network and Hafiz Saeed. He claimed that these "terrorists" were the "darlings" of the United States a few decades ago.

"Don't blame us for the Haqqanis [the Haqqani Network] and don't blame us for the Hafiz Saeed, chief of banned Jamaat-ud-Dawa. These were the people who were your darlings just 20 to 30 years back. They were being dined and wined in the White House, and now, you say 'go to hell Pakistanis because you are nurturing these people," The Dawn quoted Asif saying at the Asia Society in New York.

"It is very easy to say Pakistan is floating the Haqqanis and Hafiz Saeed and Lashkar-e-Taiba. They are liabilities. I accept that they are liabilities, but give us time to get rid of them, because we don't have the assets to match these liabilities and you are increasing our liabilities further," the foreging minister said.

Asif is attending the 72nd session of the UN General Assembly.

He also expressed Islamabad's eagerness to work alongside the US. "Pakistan stands ready for effective management of the Afghan border to stop terrorist infiltration and to facilitate a peace settlement in Afghanistan," he said.

The US has previously blamed Pakistan for not taking compelling action against the Haqqani Network.

Washington states that the militant group has been operating out of "Pakistan-based safe havens" causing threat to the US and native forces in Afghanistan.

Asif said that Islamabad cannot be held responsible for the tensions in Afghanistan, claiming that peace cannot be established only through the strategy applied by the US and would require negotiated settlement.

"Pakistan cannot owe responsibility for peace and security in Afghanistan, adding that effective border management with Afghanistan is imperative to stop the infiltration of terrorists," the News International quoted Asif, as saying while addressing the Asia Society in New York.

Asif said that the United States cannot succeed in Afghanistan by waging war, adding that for the last 16 years, it is clear that peace will not be restored by resorting to military force.

Asif reiterated that Pakistan wants peace in Afghanistan, but several Afghan leaders want the status quo to continue for their own vested interests