Give me one of yours, says Kejriwal, after EC says AAP hacked 'lookalike' EVM 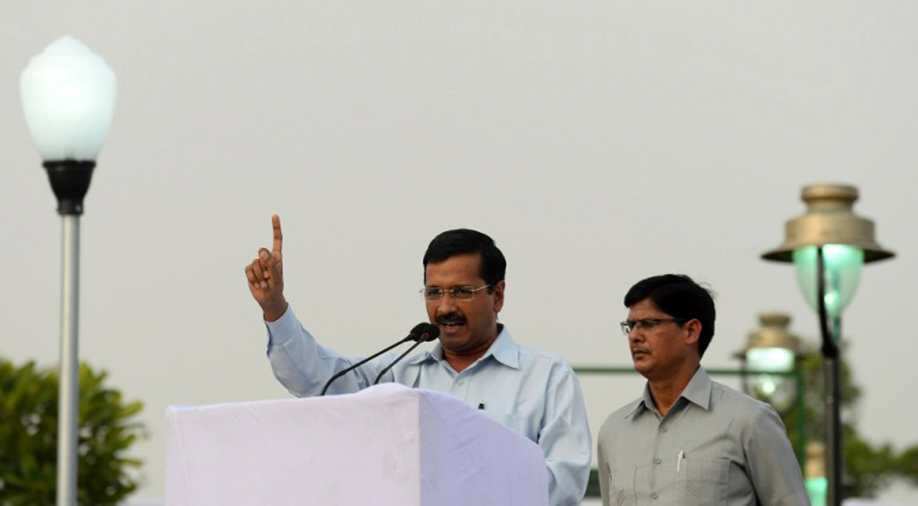 EVMs 'are technically secured and function under an elaborate administrative and security protocol,' the election commission said in a statement. Photograph:( AFP )

The Election Commission Tuesday rejected the claim of the Aam Aadmi Party -- that its EVMs can be hacked, saying the machine hacked in the Delhi assembly was a "lookalike" gadget and not actual equipment used by it.

"It is common sense that gadgets other than ECI-EVMs can be programmed to perform in a pre-determined way, but it simply cannot be implied that ECI-EVMs will behave in the same manner because they are technically secured and function under an elaborate administrative and security protocol," the Commission said in a statement. The "so-called" demonstration on "extraneous and duplicate gadgets" which are not owned by the EC "cannot be exploited to influence our intelligent citizens and electorate to assail or vilify the EVMs used by the Commission in its electoral process, it added.

Delhi Chief Minister Arvind Kejriwal today dared the Election Commission to provide an EVM (used by the Election Commission) to the AAP, claiming it can be tampered with in 90 seconds flat. During a day-long special sitting of the Delhi Assembly today, AAP MLA Saurabh Bhardwaj put on a "live demonstration" on how electronic voting machines can be programmed to favour a particular political party.

The election commission can give us its machines, we will show how to hack it in 90 seconds by merely changing its motherboard,' Kejriwal told reporters

"He (Bhardwaj) showed how easy it is to hack EVMs and it is being done on a massive scale. It is dangerous for the democracy and the country, and people should raise their voice against it. "The ECI can give us its machines, we will show how to hack it in 90 seconds by merely changing its motherboard," Kejriwal told reporters outside the assembly. Bhardwaj claimed that a voting machine can be manipulated by simply feeding it with a "secret code".

The AAP today "demonstrated" ways to "rig EVMs" in the Delhi Assembly, which the BJP said was an attempt to divert attention from charges of "bribery" against Chief Minister Arvind Kejriwal.

The AAP's attempt to whip up the issue comes at a time the party is in the eye of a political firestorm over its sacked minister Kapil Mishra's allegations of corruption against Kejriwal and minister Satyendar Jain. On his part, Mishra, who was suspended from AAP's primary membership yesterday, mocked it saying the party should stop living in "denial" and accept the fact that people do not vote for Kejriwal anymore.

Participating in a discussion on the issue during the day-long special session of the Delhi Assembly, AAP MLA Saurabh Bhardwaj claimed that a voting machine can be manipulated by simply feeding it with a "secret code". He demonstrated how it can be done using, what party sources said was, a "prototype EVM" developed by a "a group of IITians".

Interestingly, leaders of the Congress, the Trinamool Congress, the Janata Dal (United) and the Rastriya Janata Dal were present on the gallery of the House when Bhardwaj staged the demonstration. Before Bhardwaj's demonstration, Kejriwal tweeted, "Saurabh Bhardwaj will reveal the truth behind a big conspiracy in the country. Satyameva Jayate". Bhardwaj, who represents the Greater Kailash constituency, claimed that in his capacity as an engineer, he had extensively worked in this area and was aware of how the machines can be fiddled with.

After entering a "secret code", Bhardwaj pressed 10 votes for the AAP in the machine used for the purpose of demonstration. Later, in the display panel, it turned out that the votes went to the BJP. "We are not making baseless allegations on EVM manipulation. With this demonstration, it has been proved that EVMs can actually be hacked," Bhardwaj said.

"EVM manipulation is a very serious issue. It is a danger to the democracy of the country. There is no machine in the world which cannot be hacked," the AAP MLA claimed. Kejriwal has repeatedly claimed that the AAP's poll debacles have something to do with tampering of EVMs. The issue threatened to split the party with a section refusing to toe the line taken by him.