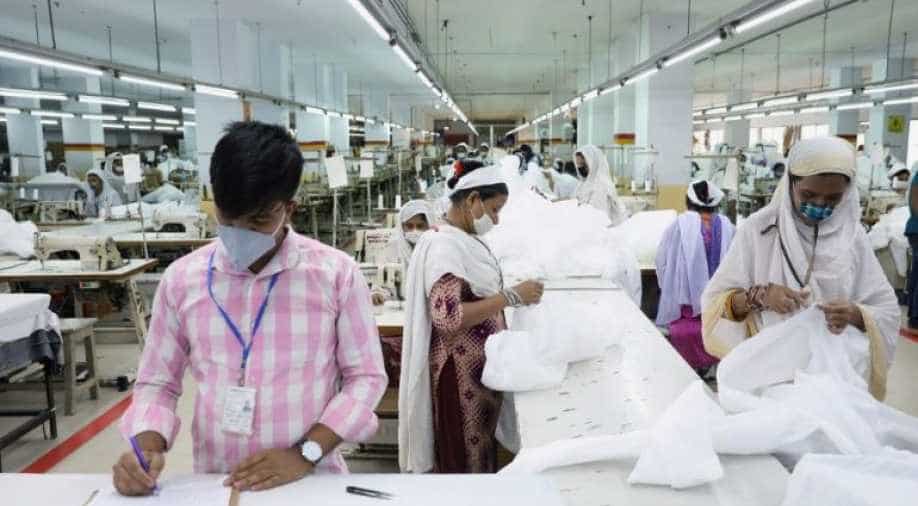 Bangladeshi garment workers make protective suit at a factory amid concerns over the spread of the coronavirus disease  Photograph:( Reuters )

The two groups, which represent the vast majority of the readymade garment and knitwear manufacturers in the country, said cancellations were increasing daily amid coronavirus-driven lockdowns globally.

Bangladesh, the second-largest apparel producer after China, is set to lose roughly $6 billion in export revenue this financial year amid cancellations from some of the world's largest brands and retailers, two major industry bodies said on Tuesday.

The two groups, which represent the vast majority of the readymade garment and knitwear manufacturers in the country, said cancellations were increasing daily amid coronavirus-driven lockdowns globally, and these risked jeopardizing millions of jobs in the poor South Asian nation.

Garment exports accounted for $34.1 billion or 84 per cent of the country's overall exports in the fiscal year through June 2019.

"We've lost more than $3 billion due to the crisis. All our orders until July have been cancelled or suspended," Mohammad Hatem, vice president of Bangladesh Knitwear Manufacturers and Exporters Association (BKMEA), said.

"Suspended orders will eventually get cancelled. All these orders were placed for summer and it takes three months to get these delivered. If they are not taking supplies now they will not take it when the summer is over," said Hatem. "...Many factories will be closed if this persists."

One industry source, who asked not to be identified, said Gap, Zara and Primark were among the brands that had cancelled orders. Gap and Zara did not immediately respond to emails seeking comment. Primark confirmed the step.

All Primark stores were closed and the brand had been losing sales of $807.82 million a month, it said in a statement.

"We have large quantities of existing stock in our stores, our depots and in transit that is paid for", the statement said. "If we had not taken this action, we would be taking delivery of stock that we simply could not sell".

Huq said some 1,048 factories that were part of BGMEA had reported that orders for over 900 million garments worth $2.9 billion had already been cancelled or were being held up.

H&M said that while it had earlier paused placing new orders, it had not cancelled any orders already placed. It would pay as agreed for goods ordered, it said in an email.

"The substantial drop in global demand has a significant impact on our order placement at suppliers," it however cautioned. "We are placing orders based on current forecasts and will continue to evaluate the situation on a daily basis."

"This is not enough. The government should come up with more stimulus to save the country's biggest export sector," said Rezwan Selim, a director of BGMEA.

Siddiqur Rahman, a top exporter who supplies H&M and Walmart among others, said the situation was dire.

"We're facing an unprecedented time," he said. "No one knows how long this is going to take. We're trying hard not to shut down our factories. But how long can we hold out?"