Frustration mounts in Nepal over MCC 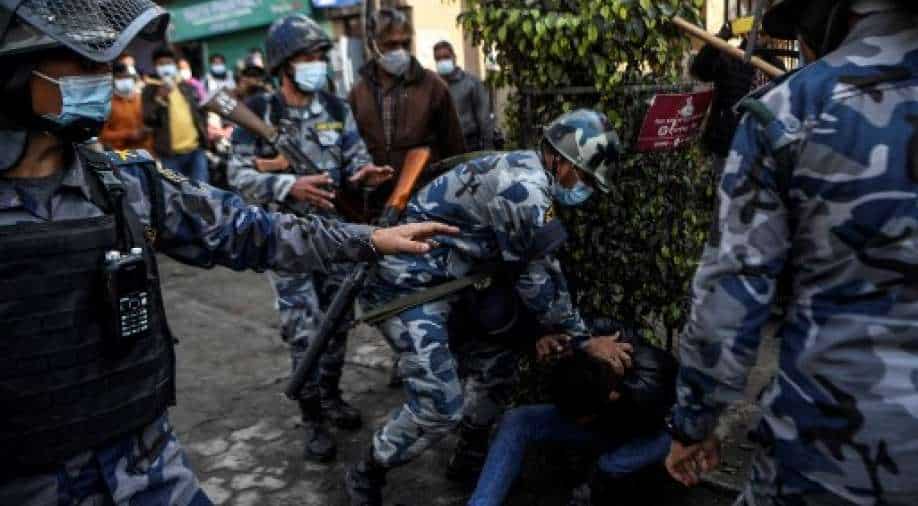 Police, demonstrators clash during protests against the proposed grant agreement from America under the MCC Photograph:( AFP )

Nepali Congress stepped back from tabling the compact following the threat of Maoist Center and Unified Socialist to quit the government.

Cadres of various political parties staged a demonstration against the MCC outside the parliament in Kathmandu following which police used water cannons to disperse the crowd.

Another group affiliated with a communist political party burned the MCC Pact draft during the protest while chanting slogans against the compact.

Major opposition comes from Prime Minister Sher Bahadur Deuba's own coalition partners including Maoist politicians -- seen as traditionally close to China have been demanding amendment in the compact arguing it undermines Nepal's sovereignty.

The government was planning to table the MCC in the Parliament today but Prime Minister Deuba and CPN-Maoist Centre) Chairman Pushpa Kamal Dahal ‘Prachanda’ had a meeting in the afternoon and decided not to table the compact in the meeting of the House of Representatives.

Nepali Congress stepped back from tabling the compact following the threat of Maoist Center and Unified Socialist to quit the government. The delay in the ratification is also because China influences some ruling parties.

More importantly, House speaker, Agni Sapkota, a leader close to Prachanda is blocking the ratification process for months. Speaker Agni Sapkota has been known to be close to Beijing and has made no secret for his opposition to the MCC.

Meanwhile, MCC headquarters has clearly stated that any further delays could lead to the end of the US grant for Nepal. The future of the ruling coalition looks uncertain with MCC Nepal Compact becoming the dividing factor.

Prime Minister Deuba has called a meeting of the coalition on Thursday to hold the decisive discussion on the compact.