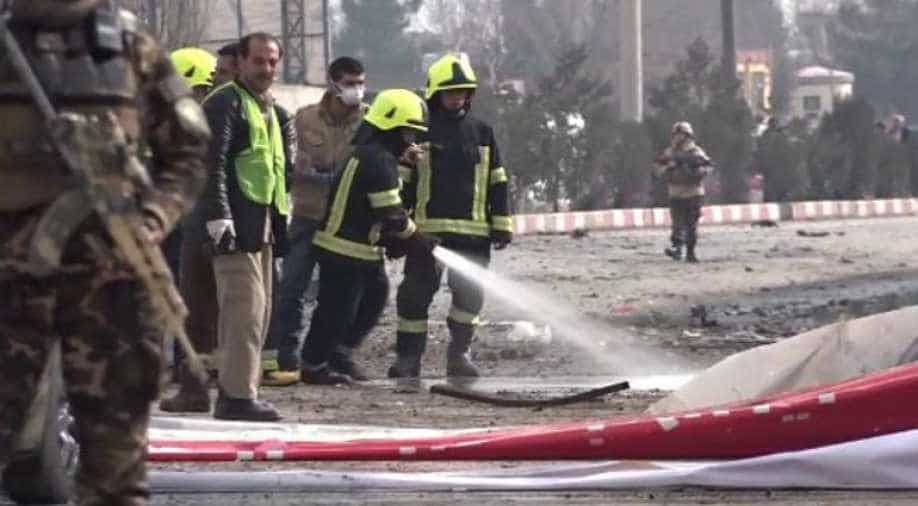 Eyewitnesses, however, said one civilian was killed in the blast. (Pic courtesy Tolo News) Photograph:( Twitter )

Local media showed extensive damage to the facades of nearby houses, and witnesses reported a strong explosion. Security forces could be seen rushing to the scene as passers-by helped move the wounded.

A horse was also badly injured in the blast and had to be shot dead in the street, an AFP reporter at the scene said.

"Unfortunately around 9:00 am, a car bombing took place in (the) Qabil Bay area of Kabul. The target of the attack was a foreign forces convoy," ministry spokesman Najib Danish told AFP, giving the toll and adding that police are investigating.

His deputy, Nasrat Rahimi, said it was not clear if there were foreign casualties following the blast.

No group immediately claimed the attack, which is the latest to hit Kabul, one of the deadliest places in Afghanistan for civilians as both the Taliban and the expanding Islamic State group step up their assaults on the city.

The bombing also comes just days after Afghan president Ashraf Ghani unveiled a plan for peace talks with the Taliban, including a proposal to eventually recognise them as a political party.

Ghani revealed his plans in a speech during international peace talks in Kabul this week that went better than expected, with officials in Washington dare to hold out hope that the longest war in US history may be heading to a negotiated settlement.

US ambassador in Kabul John R. Bass hailed Ghani's "very courageous stand" and his "commitment to pursue a peaceful settlement through talks" after more than 16 years of conflict, as officials said the onus was now on the Taliban to respond.

Before Ghani's speech, the militants had called for direct talks with the US. They have not yet offered a full response to the president's proposal, but the apparent openness to negotiations on both sides has sparked cautious optimism.

More than 16,000 foreign troops are deployed in Afghanistan under the NATO mandate, most Americans who supervise Afghan forces and conduct counter-terrorism operations.

Since November, the US military has increased air raids against Taliban positions, training camps and heroin laboratories, which are an important source of revenue for the group.

Since mid-January, militants have stormed a luxury hotel, bombed a crowded street, raided a military compound and launched a suicide attack during morning rush hour in the capital, killing more than 130 people.

COVID-19: Schools, colleges to remain closed till June 30 in Bangladesh