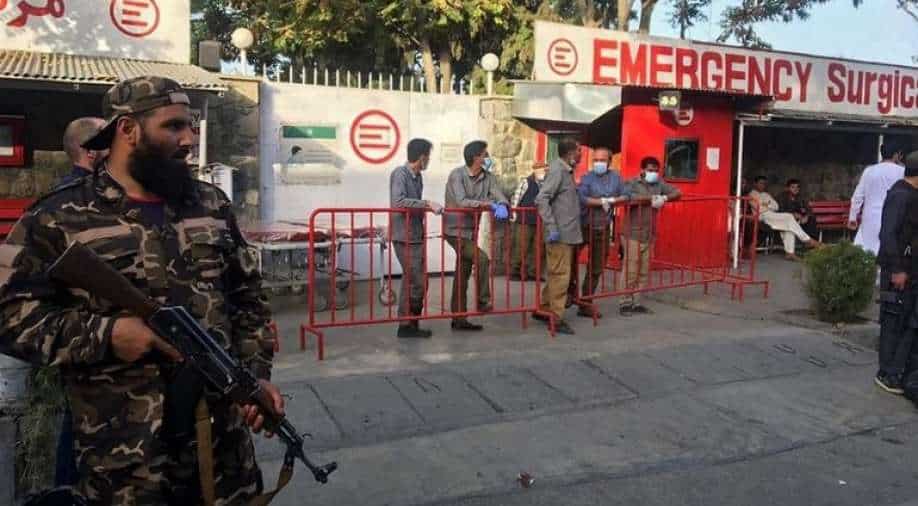 A Taliban fighter stands guard as Afghan medical staff members wait at the entrance of a hospital to receive the victims of an explosion in Kabul on Sunday. Photograph:( AFP )

A total of fifteen have been reportedly killed in an explosion outside Eidgah mosque in Kabul. The Taliban spokesman confirmed the incident. During a memorial service, some civilians gathered at the mosque to offer their condolences over the death of Taliban spokesman Zabiullah Mujahid’s mother Fateha. Ambulances could be heard arriving at the spot. No one has immediately claimed the responsibility for the attack

In what can be called an attack on Taliban's leaders, 15 civilians have been reportedly killed in an explosion outside Eidgah mosque in Chaman area of Kabul on Sunday. The Taliban spokesman confirmed the incident.

Some civilians had gathered at the mosque in Afghan capital to offer their condolences over the death of Taliban spokesman Zabiullah Mujahid’s mother Fateha during a memorial service.

The victims may include Taliban guards, who were manning the area.

Ambulances could be heard arriving at the spot. Three people have also been arrested near the blast site, said unconfirmed reports.

The explosion was followed by gunfire, said witnesses at the spot. No one has immediately claimed the responsibility for the attack.

Even after the Taliban’s takeover of the war-torn country, the spate of blasts has not stopped.

Earlier, the Taliban used to target Afghanistan government officials in targeted killings. Now, it seems the same is being done by rival insurgents, such as Islamic State group, against the new rulers of the country.

There is a possibility of escalation of conflict between the two groups.

Meanwhile, gunmen shot and killed two Taliban fighters and two civilians in the eastern city of Jalalabad on Saturday, a Taliban official said.

Two other civilians were wounded in the attack, said Mohammad Hanif, a cultural official for the city's surrounding province, Nangarhar.

In another incident, blasts followed by gunfire were reported in Kabul’s Khair Khana area. IS-K militants reportedly blew themselves up in a house where they were being surrounded by Taliban men.