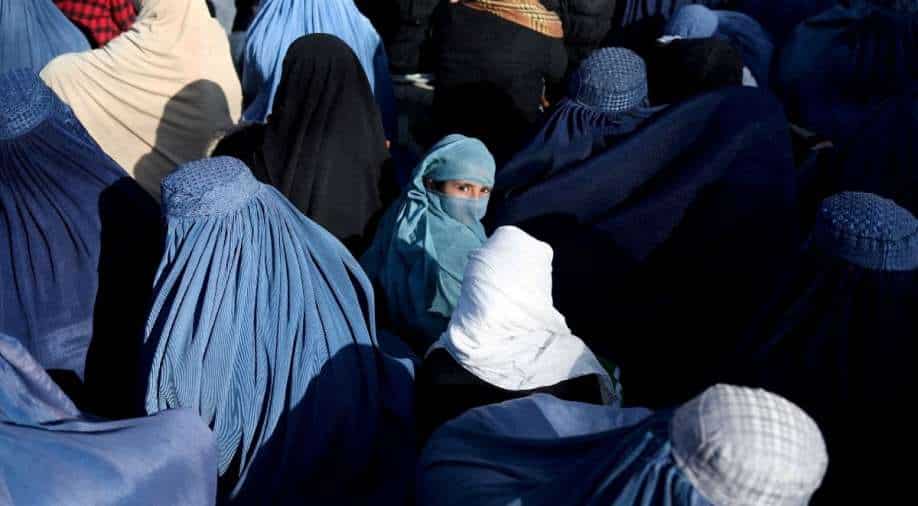 File photo of a girl sits in front of a bakery in the crowd with Afghan women. Photograph:( Reuters )

Mahajar said female presenters could wear a medical face mask, as has been widely used during the COVID-19 pandemic

In Afghanistan, the Taliban authorities have ordered the female TV presenters to cover their faces while on-air, news agency Reuters reported on Thursday (May 19) quoting an official.

Akif Mahajar, who is the spokesman for the Taliban's Ministry of Vice and Virtue, told Reuters: "Yesterday we met with media officials... they accepted our advice very happily."

As per the report, Mahajar also said that the move would be received well by Afghans which appeared to be conflicting as the Taliban's apparent return to past hardline rule has caused anger at home and abroad.

Mahajar added: "The last date for face covering for TV presenters is May 21," referring to when compliance with the new requirement should begin.

To comply with the Taliban's "advice", Mahajar said that the female presenters could wear a medical face mask, which was been widely used during the coronavirus pandemic.

"Today (Thursday) the production department wore masks but the news office continued as usual," a local television channel's female employee told Reuters. The employee, who wished to remain anonymous also said that the Taliban official had visited the office a day before.

As reported by the Guardian, a local media official said that his station had received the order and was told it was "not up for discussion".

It has been understood that some channels have already begun implementing the new rule.