Afghanistan among few countries with no women in top government positions: Report 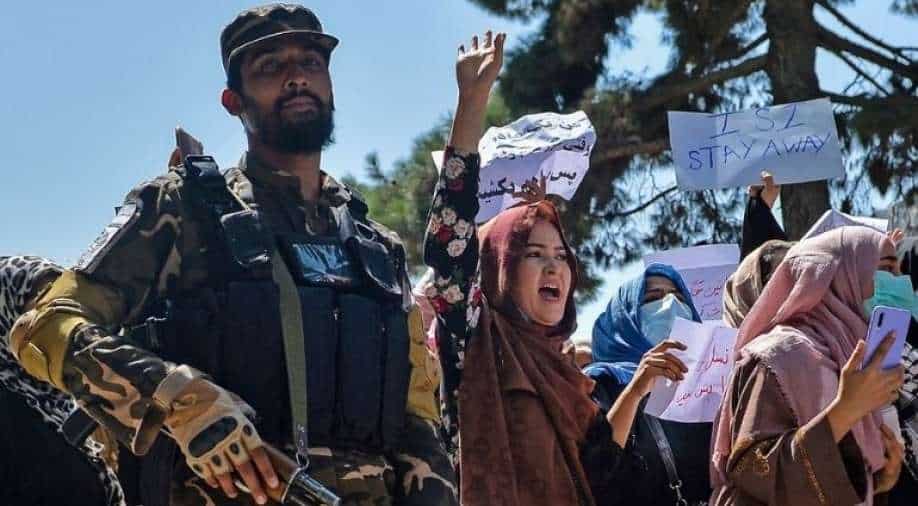 Afghan women shout slogans next to a Taliban fighter during an anti-Pakistan demonstration near the Pakistan embassy in Kabul Photograph:( AFP )

Women had occupied only 6.5 per cent of ministerial positions in Afghanistan before the Taliban seized power

On September 8, the Taliban announced the formation of an interim government, declaring Afghanistan as the Islamic Emirate.

Two things stood out in the selection of key figures heading the government.

One, the new cabinet consisted of Taliban members in which 14 of them were on UN Security Council’s terrorism blacklist, including acting Prime Minister Mullah Mohammad Hasan Akhund and his both deputies.

Second, the conspicuous absence of a women minister and the dropping of the post for Ministry of Women under the new regime.

Around  27% of the Afghan parliament was comprised of women, ranking it in line with the United States, where women make up 26.8 per cent of all members of Congress, according to the IPU.

Afghanistan’s share of women legislative members had hovered around 27 per cent since 2005, when the first session of the elected body sat after three decades. Under the 2004 Constitution, at least 68 of the 250 total seats of parliament's lower house are reserved for women, with two seats reserved for women for each of the country’s 34 provinces.

Now, the country joins the ranks of a dozen other countries where there are no women serving in high-ranking positions in government.

According to the IPU and UN Women, the absence of women in Afghanistan's government bucks the global trend. Most countries have women in senior government positions, and the number of nations with women as heads of state or in government is at an all-time high.

There are 22 countries that have women as the head of state or government.

Europe is home to the majority of those countries led by women, including Denmark, Estonia, Finland, Greece, Germany, Iceland and Norway.

Despite repeated assurances from the Taliban regime that they would respect the rights of the women, and that they would enjoy greater freedom under the new regime, a look at the cabinet members and some their recent controversial statements falls in contradiction to their promises.

Taliban spokesperson Sayed Zekrullah Hashimi, in an interview to Tolo News, had stated, "A woman can't be a minister, it is like you put something on her neck that she can’t carry.”

He added that it is not necessary for a woman to be in the cabinet, adding that women "should give birth".

"Women protesters can't represent all women in Afghanistan," he added.

Hashimi was responding to a series of protest organised by the women in Kabul seeking greater political rights in the government.

The Afghan women were then driven away by the Taliban who used whips and sticks against the protesters in the crackdown on dissent.

Videos and pictures showed the women chanting, "Long live the women of Afghanistan". Some held placards that read: "No government can deny the presence of women" and "I will sing freedom over and over."

The Taliban, according to witnesses, also beat up journalists covering the demonstration, the report said.