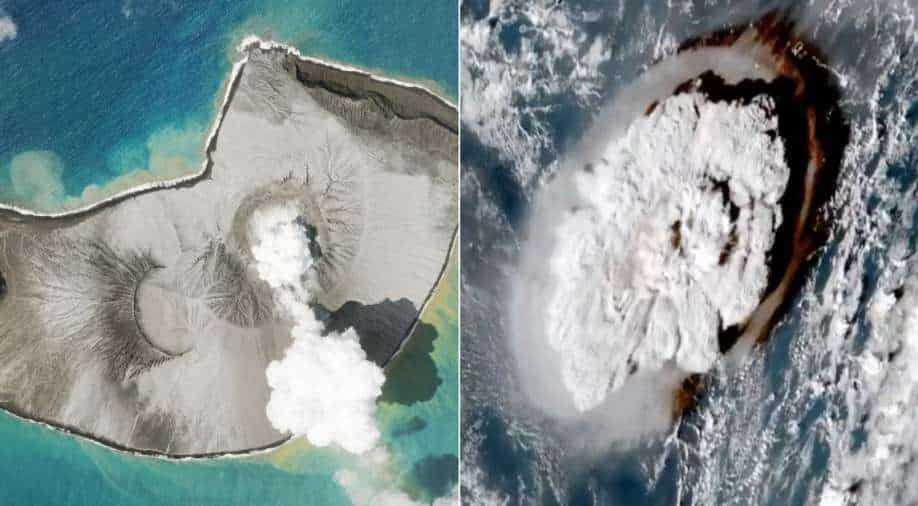 (L) A Planet SkySat image shows a plume of smoke rising from the underwater volcano Hunga Tonga-Hunga Ha'apai days before its eruption on January 15. Photograph:( Reuters )

A massive underwater volcano erupted off Tonga this year in January, triggering Tsunami warnings. The dramatic explosion of the Hunga Tonga Hunga Ha'apai volcano was seen in satellite images as the eruption sent smoke and ash into the air.

The volcanic eruption sent tsunami waves across the Pacific and caused massive damage, knocking out communications for the nation of about 105,000 people.

A New Zealand-led team studied the flanks of the seamount to analyse the impact of the eruption, which was surprisingly lesser as compared to what experts had estimated.

The Hunga-Tonga Hunga-Ha'apai hasn't changed that much, researchers at New Zealand's National Institute for Water and Atmospheric (NIWA) found.

In a tweet, NIWA noted that the "month-long research voyage investigating the undersea impacts of the massive Hunga Tonga-Hunga Ha’apai January eruption defied our scientists’ expectations."

2/6 The eruption displaced at least 7 cubic kms of material and changes were seen in the surrounding 8,000 sq kms of the 22,000 sq kms mapped by RV Tangaroa, with ash and debris up to 50m thick on the seafloor.

The study revealed that the seafloor around the volcano is mostly barren, but with abundant pockets of life on the surrounding seamounts, giving a baseline for monitoring future recovery.

Kevin Mackay, who is the expedition leader and NIWA marine geologist, said he was surprised to see the results. "Given the violence of the eruption on 15 January, I'd expected the edifice to either have collapsed or been blown apart, and this is not the case," he explained.

"While the volcano appeared intact, the seafloor showed some dramatic effects of the eruption. There is fine sandy mud and deep ash ripples as far as 50km away from the volcano, with gouged valleys and huge piles of sediment," he added.