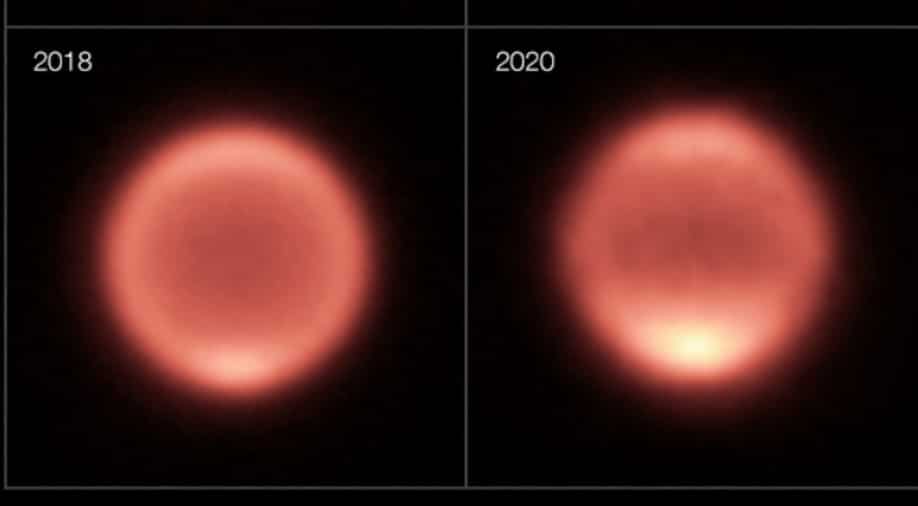 This handout image released by The European Southern Observatory shows a composite of thermal images of Neptune taken between 2006 and 2020. Photograph:( AFP )

In a new study published in the 'Planetary Science Journal' astronomers said that Neptune has experienced an unexplained shift in temperature.

The study's lead author Michael Roman, a postdoctoral research associate at the University of Leicester, said in a statement "Since we have been observing Neptune during its early southern summer, we expected temperatures to be slowly growing warmer, not colder."

"Temperature variations may be related to seasonal changes in Neptune's atmospheric chemistry, which can alter how effectively the atmosphere cools."

"But random variability in weather patterns or even a response to the 11-year solar activity cycle may also have an effect," he added.

With seasons lasting 40 years each, the planet Neptune should be spared sudden changes in climate, yet it has been cooling significantly since the start of its austral summer 17 years ago, as per the research.

According to the study co-author Glenn Orton, a senior research scientist at NASA's Jet Propulsion Laboratory, "Our data cover less than half of a Neptune season, so no one was expecting to see large and rapid changes."

"I think Neptune is itself very intriguing to many of us because we still know so little about it," Roman said.

"This all points towards a more complicated picture of Neptune's atmosphere and how it changes with time."

Also read | Lunar samples collected by Neil Armstrong, first person to walk on the Moon, are heading to auction

Neptune is the solar system's most distant planet. It possesses an extremely dynamic atmosphere.

Neptune's highest clouds evolve so rapidly that the planet's appearance can change dramatically over the course of days. It has the most powerful zonal winds in the solar system.

Neptune orbits more than 30 times as far away from the sun as Earth at an average distance of about 2.8 billion miles (4.5 billion km).

It needs about 165 Earth years to complete a single orbit around the sun, a Neptunian year.