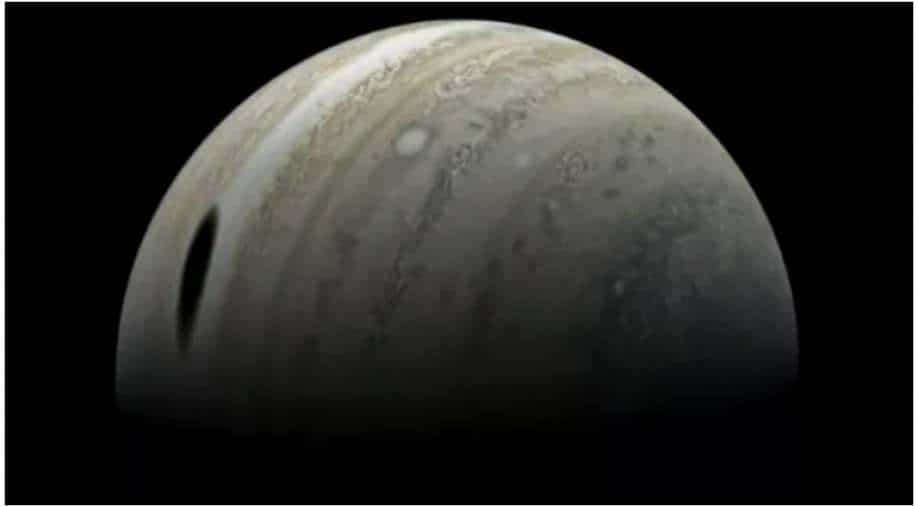 (Image: NASA) Planet Jupiter with shadow of its moon Ganymede can be seen in this image clicked by NASA's Juno spacecraft Photograph:( Others )

An interesting image taken by NASA's Juno spacecraft shows us the benefits of having eyes in the sky. The moment captured in this pic cannot possibly be witnessed from Earth

Play of shadows in space causes a great many effects. The celestial bodies come between a star and another planet and cast their shadow on the latter. We are very well familiar with this play here on Earth as when Moon comes between the Sun and Earth, the shadow it casts causes a solar eclipse.

When it's time of Earth to come between Sun and Moon, we Earthlings get to witness a lunar eclipse.

With naked eyes, our ability is limited to watching only these two (but brilliantly beautiful) space events. Fortunately, we have enough telescopes and even spacecrafts looking at the void beyond the Earth's atmosphere to bring us brilliant pictures.

Take NASA's Juno spacecraft for example. The spacecraft is hovering around Jupiter for last five years. It has sent invaluable data and images our way and it continues to send more. These images have helped us to study the gas giant and its moons.

An interesting image taken by Juno spacecraft shows us the benefits of having eyes in the sky. The moment captured in this pic cannot possibly be witnessed from Earth

This image shows shadow of Jupiter's moon Ganymede falling on the gas giant. As per Space.com, this image was captured by Juno spacecraft during its 20th flyby.