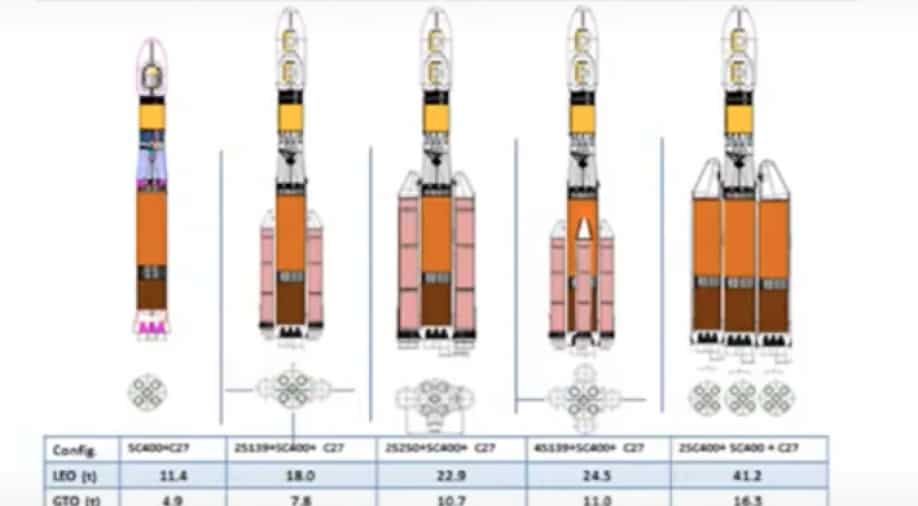 GTO is an intermediary orbit(180km at its closest point to earth and 36,000km at its farthest point from earth) in which rockets place heavy satellites. Photograph:( WION )

Speaking at a virtual event organised by ISRO and CII, N Sudheer Kumar, Director, Capacity Building Programme Office, ISRO, revealed that variants of this new fleet of heavy-lift rockets would be able to place a payload weighing anywhere between 4.9 tonnes and over 16 tonnes in the tonne synchronous Transfer Orbit (GTO).

To attain total self-reliance in the launch of heavy satellites (weighing above 4 tonnes) and to meet future demands, the Indian Space Research Organization is working on a fleet of five new rockets. According to a senior official, the five Heavy-lift Launch Vehicles (HLV) are in their project report stage.

In terms of design and appearance, this new fleet of rockets would be quite similar to the existing SSLV, PSLV and GSLV and GSLV Mk3 rockets, but they would be powered by even more capable, powerful and technologically advanced engines. Presently, India pays and utilises the services of Ariane-5, a foreign rocket, to launch satellites that weigh over 4 tonnes.

Speaking at a virtual event organised by ISRO and CII, N Sudheer Kumar, Director, Capacity Building Programme Office, ISRO, revealed that variants of this new fleet of heavy-lift rockets would be able to place a payload weighing anywhere between 4.9 tonnes and over 16 tonnes in the tonne synchronous Transfer Orbit (GTO). This is an enormous improvement over the current maximum lift capability of 4 tons that the GSLV Mk3 rocket has performed to GTO.

GTO is an intermediary orbit (180km at its closest point to the Earth and 36,000km at its farthest point from the Earth) into which heavy satellites are launched by rockets. After being placed in GTO, the satellites use their onboard propulsion to reach a circular orbit 36,000 km above the earth (it is at the same distance from the earth at any given point of time). Being in the 36,000km circular orbit (also known as Geostationary or GSO orbit) allows for communication and monitoring of a large portion of the Earth. three satellites in GSO orbit are capable of covering nearly the entire globe.

According to Kumar, the work to upgrade the lift capability of GSLV Mk3 to 7.5 tonnes to GTO, is on the verge of being concluded. This major upgrade to India’s rocket is being made possible owing to the development of two kinds of rocket engines: a semi-cryogenic engine that burns a special variant of kerosene (dubbed ISROsene) and liquid oxygen; and a cryogenic engine that burns a mixture of liquid hydrogen and liquid oxygen. The said semi-cryogenic engine stage is dubbed as the SC120, and the upgraded cryogenic engine stage is dubbed as the C32. As per ISRO’s naming convention for rocket stages, the letter (s) refers to the type of engine fuel-Solid (S), Liquid (L), Semi-cryogenic (SC) and Cryogenic (C) and the accompanying number refers to the mass (in tonnes) of propellant carried. Simply put, a rocket is a combination of multiple engines (stages) that are vertically stacked.

"Soon the stage will be inducted into the rocket, then we will not depend on foreign sources for the launch of heavy communication satellites (weighing over 4 or 5 tonnes)," Kumar said. Regarding ISRO’s ongoing projects, he outlined that work was underway on the full-scale model of the Reusable Launch Vehicle Technology Demonstrator (RLV-TD), besides work to scale up the proto-model of the air-breathing engine. For ISRO, these are crucial technologies to master to develop a fully reusable space vehicle dubbed the "TSTO," or Two Stage to Orbit.

The Director of ISRO’s CBPO also shared the configuration of the fleet of five heavy-lift rockets that were in their project report stage. The configurations refer to new and more powerful rocket stages-SC400 semi-cryogenic stage, the C27 cryogenic stage, and S250 solid rocket booster. Simply put, depending on the type of mission, payload to be lifted and rocket required, different variants of engines would be stacked vertically to run a relay race to space. Each stage would detach from the rocket after propelling the rocket to a certain altitude and speed, then the next engine would take over. This process goes on until the satellite (payload) reaches its final orbital destination.