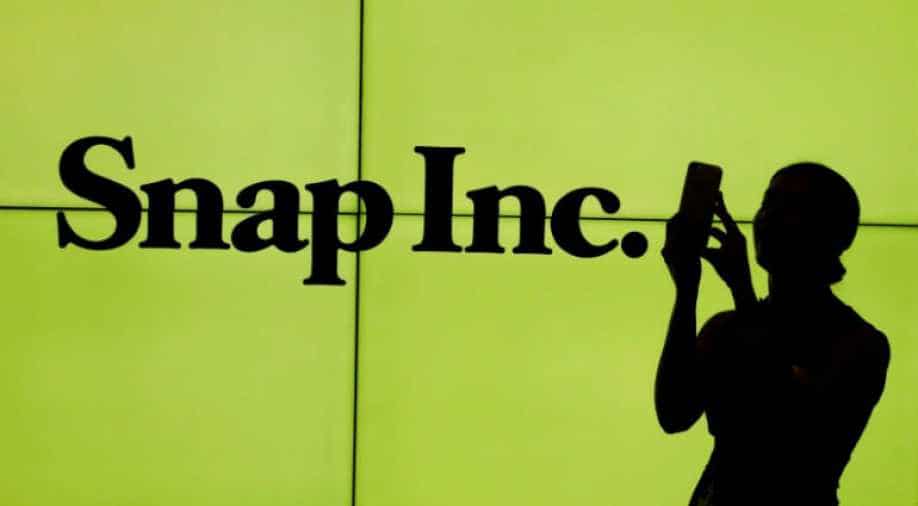 A woman stands in front of the logo of Snap on the floor of the New York Stock Exchange (NYSE) while waiting for Snap to post their IPO Photograph:( Reuters )

Shares tumbled 23 per cent in after-hours trading to wipe some $6 billion from Snap's market value. ||The performance echoed slides in Facebook and Twitter after they posted debut scorecards following their IPOs.

Snap shares plunged on Wednesday after the owner of Snapchat reported slowing user growth and revenue in its first earnings report as a public company. It missed some Wall Street estimates as it competes with copycat messaging apps.

Shares tumbled 23 per cent in after-hours trading to wipe some $6 billion from Snap's market value, a reversal for the company after a red-hot March initial public offering that was the biggest for a US tech company since Facebook's 2012 debut.

"Some investors were hoping Snap would surprise them with big numbers in its first quarterly report", BTIG analyst Richard Greenfield said.

He added, "The fact that they failed to live up to expectations, let alone exceed them, disappointed people."

The performance echoed slides in Facebook and Twitter after they posted debut scorecards following their IPOs. Twitter shares cratered 24 per cent the next day, while Facebook's tumbled 11 per cent, still the biggest-ever one-day losses for both.

Snap Chief Executive Evan Spiegel sought to reassure investors during an earnings call, fielding a dozen questions that ranged from strategy to how it would deal with competitors.

He also did not shy away from one query that allowed him to take a feisty jab at Facebook.

"If you want to be a creative company, you've got to get comfortable with and enjoy the fact that people are going to copy your product if you make great stuff," Spiegel said.

Making a comparison to the search industry, Spiegel added: "Just because Yahoo has a search box doesn't mean they're Google."

Snap said its daily active users (DAUs) rose 36.1 per cent to 166 million in the first quarter from a year earlier, marking a slowdown from the 47.7 per cent rise for the fourth quarter and 62.8 percent jump for the third quarter that the company reported in its IPO filing.

The slowing rate of growth was in line with an estimate from JPMorgan, which accurately expected 166 million DAUs for the first quarter. Monness, Crespi, Hardt & Co Inc had pegged them even higher at 173 million.

Snap's March IPO priced above the company's target range as investors put aside concerns about lack of profits and voting rights to get a piece of the action. The IPO raised $3.4 billion and gave the company a market valuation of roughly $24 billion, and shares surged 44 per cent in their first day of trading.

Facebook, which made a $3 billion bid for Snapchat in 2013, has upped the ante by offering camera-related features similar to Snap on its platforms, including Instagram and WhatsApp. The company said in April that Instagram Stories alone had reached 200 million daily active users.

Snapchat's growth was faster than Facebook, however, which said its overall daily user base grew 18 per cent year-over-year in the first quarter, as well as Twitter, which reported growth of 14 per cent in DAUs from a year earlier.

Like many other Silicon Valley businesses, Snap is closely tied to its young founders.

Spiegel, who received a stock-based bonus worth nearly $600 million for taking the company public, is 26, and co-founder and Chief Technology Officer Bobby Murphy is 28. The company, though, has brought on others with more experience, including Chairman Michael Lynton, former chief executive of Sony Corp's movie and music businesses. A lot is riding on Spiegel to build products that delight people, said analyst Greenfield. "The future of Snapchat is on Evan Spiegel and his team to out-innovate everyone else. Time will tell whether that's possible," he added.

Snap's revenue jumped nearly four-fold year over year to $149.6 million but fell short of the average analyst forecast of $158 million, according to Thomson Reuters I/B/E/S. Revenue was also down from the fourth quarter of 2016, a seasonally stronger period for ad sales, when it was $166 million.

Revenue was "a relatively disappointing number," Pivotal Research analyst Brian Wieser said. "To their credit," he added, "they did guide towards a number that would be lower, which it was." Average revenue per user was 90 cents in the first quarter, Snap said, up from 33 cents the same quarter a year earlier but below the $1.05 per user in the fourth quarter of 2016.

Although the figure of $2 billion in total stock-based compensation was known ahead of time, investors were surprised to see all of it show up in a single quarter rather than spread out over time, said Eric Kim, managing partner at Goodwater Capital. "It is an eye-popping number for sure," he said.

Snapchat launched in 2012 as a mobile app that allows users to send photos, known as snaps, that vanishes within seconds. The company rebranded as Snap Inc last year, and moved into the hardware space with Spectacles, its colorful sunglasses that record short videos to post on Snapchat.

Users created more than 3 billion snaps daily on average during the first quarter, up from more than 2.5 billion during the third quarter of 2016, the company said. Snap receives some revenue from branded or sponsored filters and lenses, but depends on advertising dollars for the bulk of its overall revenue.

Digital marketing firm eMarketer in March had trimmed its 2017 US advertising revenue forecast for Snap by $30 million to $770 million, citing higher-than-expected revenue sharing with the company's partners.

The total US digital advertising market is meanwhile expected to reach $83 billion, according to eMarketer, up nearly 16 per cent from last year.