Dear sexist trolls, Mimi and Nusrat were not the only ones to post photos outside Parliament 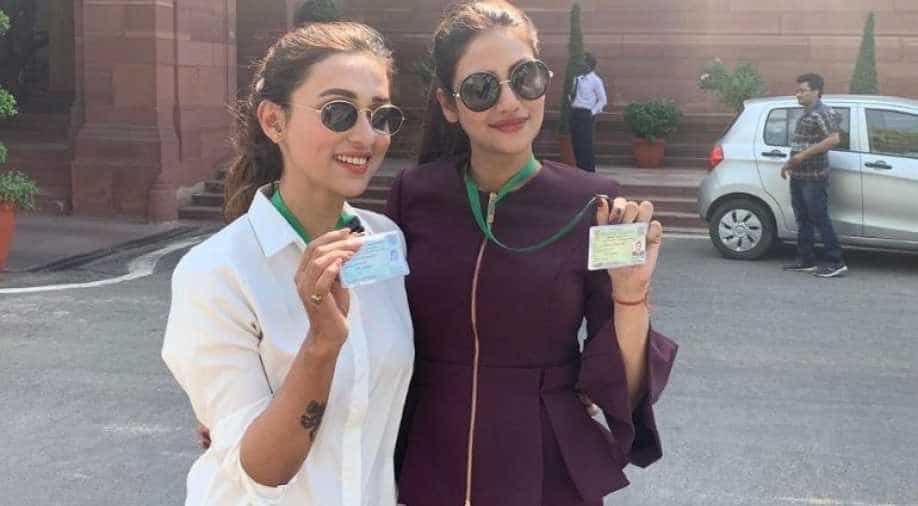 How sexist is our society that we diss the women and question their credibility and praise the men at the same time?

People of India really don't know how to relax. The majority has chosen Modi and re-elected BJP back to power (or is it the other way round?). It is a time to celebrate, rejoice and celebrate and maybe tune in to watch the beloved PM give speeches of desh, right? No. Because as soon as they have chosen their leaders, they have obviously found a new issue to outrage upon. And of course, like it is in most cases, at the receiving end are two women.

On Monday, as newly elected MPs went to Parliament to collect their IDs and certificates, many of took to social media to post photos from outside and inside Parliament. The excitement of first time MPs was naturally high as for many it was indeed a dream that had come true. Among them were actresses and now TMC MPs Mimi Chakraborty and Nusrat Jahan - who shared their happiness and excitement via posts on social media. The two looked happy as they flashed their new ID Cards and the victory sign posing right outside Parliament.

And its us again
1st day at Parliament @nusratchirps pic.twitter.com/ohBalZTJCV

The junta took no time to take the higher moral ground on the two actresses and tutor them what to wear, what to post on their personal pages and even taught Nusrat a lesson on grammar. They were reminded in not so gentle ways that how this was 'not a film set' or a place to do a 'photoshoot' and how they should know 'what to wear' to the holy sanctum of the Indian democracy.

I almost choked on my coffee reading the comments on their attire and scrolled up to check what Mimi and Nusrat were wearing. After all, the two are indeed very glamorous and rule the Bengali film industry with their charm, beauty and perhaps even acting skills. So being top heroines, they may have gone overboard dressing up for the first day at their new job. Instead, what I found disappointed me to a great extent. You see, the two looked very regular - for the lack of a better word. Mimi was dressed in a white shirt and blue denim and Nusrat wore a burgundy pantsuit- stuff that you would find in almost every girl's wardrobe and nothing that should offend anyone in a free, democratic country like ours these days.

To quote some of the trolls, the two were asked to get real. "Seriously? This is how you pose in front of the parliament? This is not some film shooting.. Get real, girl!," wrote one user on Mimi's post while another said, "U actually don't know how to dress up.I hope it's not ur shooting place or ur holiday destination.Its an official purpose."

On Nusrat's post, someone told her to wear something more formal than a pant-suit, and wrote "parliament is not a photo studio... make your getup with formal dress..." while another one dissed the people of Basirhat who voted for her and wrote, "SHAME ON THE PEOPLE OF BOSHIRHAT FOR ELECTING THIS WOMAN WHO HAS MADE A JOKE OF OUR PARLIAMENT." 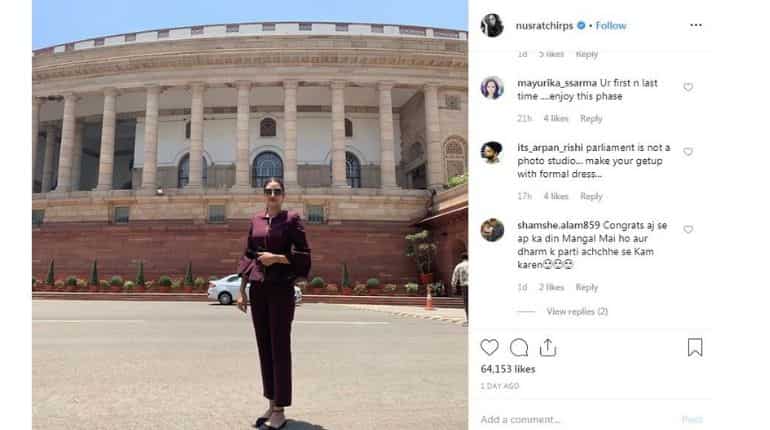 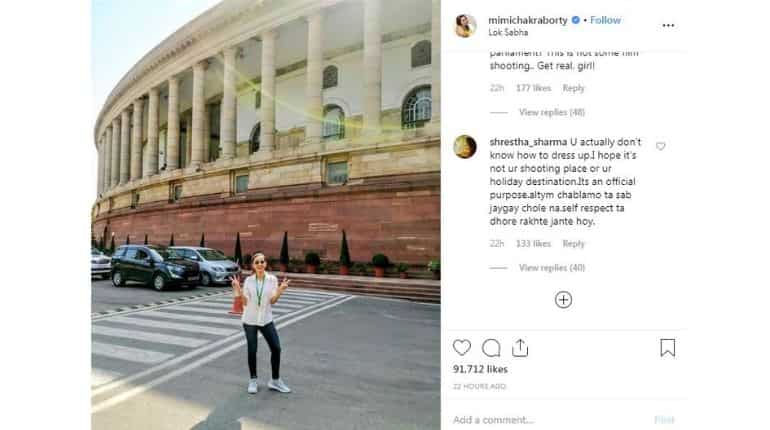 Some even compared the women to another newly elected young MP Tejasvi Surya, who won from Bengaluru on a BJP ticket and said that the two needed to learn a thing or two from him.

Pic 2: @mimichakraborty madam this is not Film set to pose like that I wondered how people elected you 🤷‍♂️

Many many congratulations @Tejasvi_Surya anna 💐💐 All the best for feature 🚩

At this point, it is important to know that just like Mimi and Nusrat, Tejasvi too shared his excitement at being inside the parliament and posted numerous photos with senior BJP leaders. Tejasvi wore formal pant and shirt and a Nehru jacket and looked happy in all the photos flashing the rocking sign. But no one seemed to have any problem with his selfies or his attire. Neither did they have problem with former cricketer and now MP Gautam Gambhir posing outside Parliament- flashing his id card much like Mimi, dressed in a white t-shirt and blue denim. There were congratulatory messages, praises for the men- but no criticism about their attires, no questions raised about their credibility.

I had waited for this selfie with my favourite @smritiirani ji from such a long time. So many countless hours I have spent hearing her speeches & interviews!

Her victory in Amethi only reinforces our faith in democracy.

Smriti Ji you are a rockstar! 🤩 pic.twitter.com/zYsxIlp0Ka 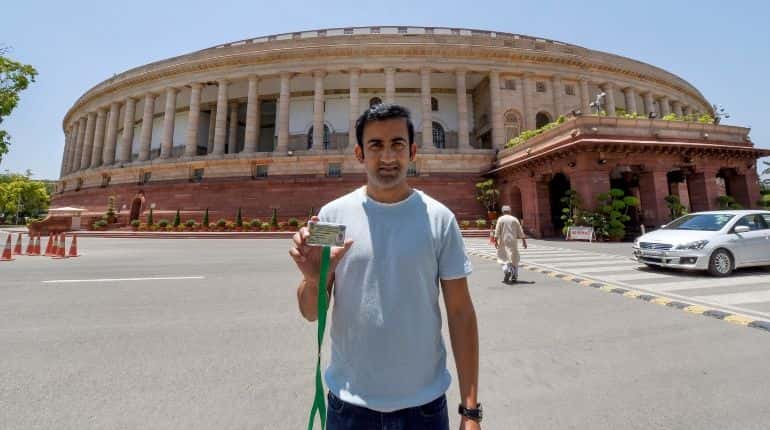 How sexist is our society that we diss the women and question their credibility and praise the men at the same time? It may be alright to be a sceptic but to completely admonish the two women on their credibility even before they have started their work is absolutely unfair.

The biases are blind to the point of being hilarious at the same time trivialising the mandate of the people and the populous votes on the basis which the women have come to power. Not just Mimi and Nursat, many other MPs have posted photos from that day- thanking their voters and rejoicing at the new role that has been bestowed upon them. So targetting just the two women, questioning their credibility and pointing out their attires speaks volumes about the society we live in. Where everyone is quick to police the woman and turn blind to the man's action.

Then there were some, who brought out old TikTok videos of the two stars and guffawed at how could they be members of Parliament.

Wow Wow Wow!!! New MPs from Bengal.. Mimi Chakraborty & Nusrat Jahaan_India is really really progressing ..it’s a welcome relief to see MP’s who are so easy on the eye 🙏🙏🙏 pic.twitter.com/F4B0EZxkZJ

While the verdict is out on whether RGV was mocking the two or praising them, the tweet itself reflects the mindset of many who are quick to judge even before they have seen their work. A person's attire, language, and face has nothing to do in Parliament. Work speaks ultimately and only time will tell how serious these new politicians are about the responsibilities that they have been given. Now is not the time.

In a free country, one has every right to speak their mind. Internet just multiplies that right manifold. But there is a thin line between calling out the wrong and making noise unnecessarily. We Indians need to understand that.