Patriotism exists in any country, for any person and every person. That kind of nationalism is strong, and it gives anyone a reason to sing and stand proud and dance

At this stage I did not realise the significance of this ceremony, I did not know what to expect and I could not have begun to fathom the feeling and emotion that I would encounter. The level of patriotism and the passion and pride on display. I had never experienced anything like this before anywhere in the world.

The ceremony happens every evening, it has been happening since 1959. The Indian Border Security Force (BSF) and the Pakistan Rangers each do a complex routine that includes marching and dancing and as the sun goes down the flags of both countries are lowered. It is meant to be at the same time a symbol of power and rivalry but also a display of cooperation between the two countries.

And of course, another never-ending queue. Even the separate one for foreigners was not much better. I made my way through the throngs of people and once I had entered the complex, I was taken aback by the sheer size of it. It was so grand and overpowering. A real physical depiction of power. It was in a semicircular shape like an open-air auditorium where the border gates were the stage. Rows and rows of seats stretching up high into the sky. And the fact that the stands were already packed with people like sardines was even more intimidating. There were thirty or forty thousand people on the Indian side. 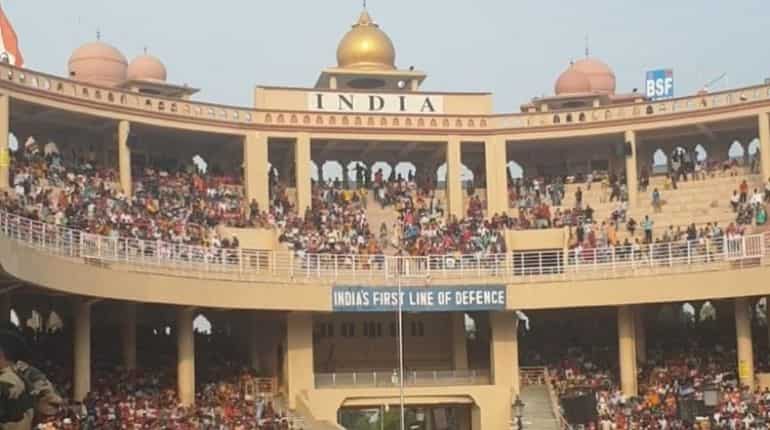 There was music and dancing. There were hundreds of girls and women all dressed in brightly colored outfits who were dancing on the main parade on the road which leads directly to the border. There were dashing men in military uniforms standing to attention lining each side of the street. I walked slowly trying to take in this visual feast, making my way to the section for foreigners which is closest to the border fence on the right-hand side. It was slightly less crowded. Everyone with a camera or phone in their hands while the rest of the stands continued to erupt with music and chanting. It was overwhelming, the energy and excitement was palpable. 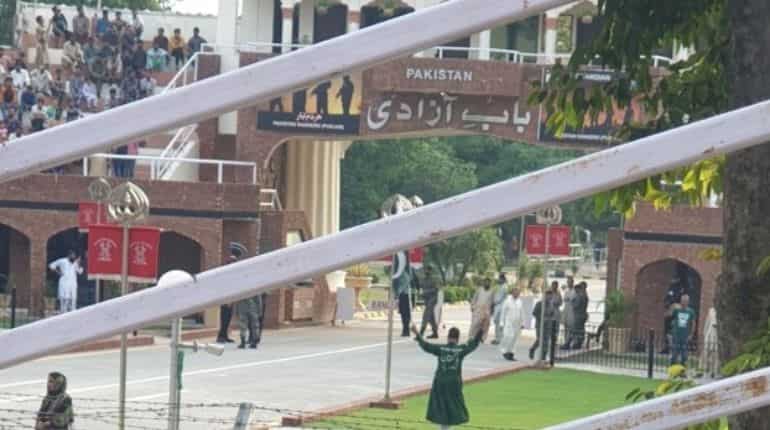 Once I was settled in my seat facing the festivities I glanced to my right where I was looking toward the border and beyond the fence...Pakistan. What I saw there was in such stark contrast to the happenings on the Indian side.

The structure at the border is a lot smaller, the capacity is probably half the size.

And there were hardly any people there. I could count less than fifty. There were armed men in uniform, the Pakistan Rangers standing guard in the same way as the Indian side along the edge of the same street and the marching band was marching and parading and there was music. But there was only one person dancing. One man, in military uniform, with one leg and holding one flag. And he was spinning around in circles to the beats of the marching band. The contrast between the two countries' celebrations was so stark. I later discovered that it had been a public holiday in Pakistan which is why the crowd was so diminished on that day.

Patriotism exists in any country, for any person and every person. That kind of nationalism is strong, and it gives anyone a reason to sing and stand proud and dance even if we only have one leg, and in this stark difference I saw so clearly that We are the same in our longing for a sense of belonging.

The spectacle of the ceremony really was worthwhile, but I was exhausted and suddenly realised that all of these people would soon be leaving this venue just after sunset.  I decided that I would not survive another interminable queue and made the very brave decision to get up and leave just before the mass exodus.

This was brave as there were so many soldiers all standing at attention. No one else was standing. All approximately 80 thousand eyes were focused on the two guards who were slowly folding the flag and then there seemed to be silence as I stood slowly and made my way down the steps that lead to the road and it felt like all of those eyes had shifted focus onto where I so conspicuously made my way along the path, walking past all the soldiers.

A thought suddenly struck me that this might not be the wisest thing to do, make moves towards where the guards were standing to attention and alert and so 'on guard', I tried my best to appear non-threatening and gave a little swoon almost as if I were about to faint, and that, thank goodness seemed to work to dispel any sense that I may be up to anything other than trying to leave the premises.

Once past the guards I made my way to where I knew that Ash was waiting to take me back to my hotel. What a day.

The next morning began with another impossibly early flight back to Delhi and straight to work from the airport, but not before one last run in with the border security forces. Well, that is slightly dramatic, but it definitely could have ended with me calling in late to the studio from an Indian prison.

I got to the airport with only my cabin-sized baggage as this is the only way to travel for a quick weekend soul searching, answer finding get-away. And with my boarding pass in hand made my way through security..... almost.

I was waiting for my bag when I noticed it was pulled to the side for inspection. I knew that I hadn't even packed my mini nail file so was unsure of the reason and waited a little impatiently as the security rescanned my bag.  They then called out enquiring who owned the offending bag, I made my way forward claiming it and dreading the embarrassing search of all your possessions, I'm ashamed to say that had been hurriedly and messily packed for my early journey.

The guard watched as I pulled out anything that I thought could be causing the security scanners to light up.  After it seemed that I had more or less emptied the contents I pulled out a Sikh sword. Yes, I know now that this is not really something that one should carry onto a flight.

But in my defense, it was simply a memento purchased from a store outside the Golden temple, a gift for my godson, it was a curio, a keepsake, not meant to do any harm.  All of this I tried to explain to a fierce and serious-looking female border guard.

After all the pleading and persuading nothing worked but she said she would allow me to check in my luggage.  This seemed the only option if I wanted to bring home a little piece of Amritsar for Joshy. So, I made my way back to the check-in counter but during my unsuccessful negotiations with GI Jane another long queue had formed, it was the sword or my job.

I went back through security, with the same boarding pass and the same sword, GI Jane was not happy, even when I explained that I was willing to surrender my sword, she told me I now needed a new boarding pass, with the time pressure this is something I could not do.

I started getting really worked up, as I was feeling the pressure of time and the thought of missing my flight and began letting my impatience come through in my slightly raised voice, and then, thank goodness, that same strange new sense of calm prevailed, and allowed me to see so clearly the mistake I was making here. I stopped and gave this border security guard a big smile and apologised and thank goodness the sudden shift in my behavior seemed to totally disarm her. She returned my smile, and the ice was broken. We came to a quick compromise, she kept Joshy's sword and let me pass with the nearly destroyed boarding pass, a “namaste” and a friendly pat on the back.

I was so relieved to not be pulled into the dreaded side room, and to find myself safely on the plane, armed only with the new lessons I had learned from this adventure, patience is something that needs work but it is so worthwhile, a plan can be made if you keep a level head a little trust and have belief in the ultimate goodness of people, and a smile really does go a long way.

Opinion | Global paradox - a crowded earth but not enough babies

Smart machines make a smarter you!