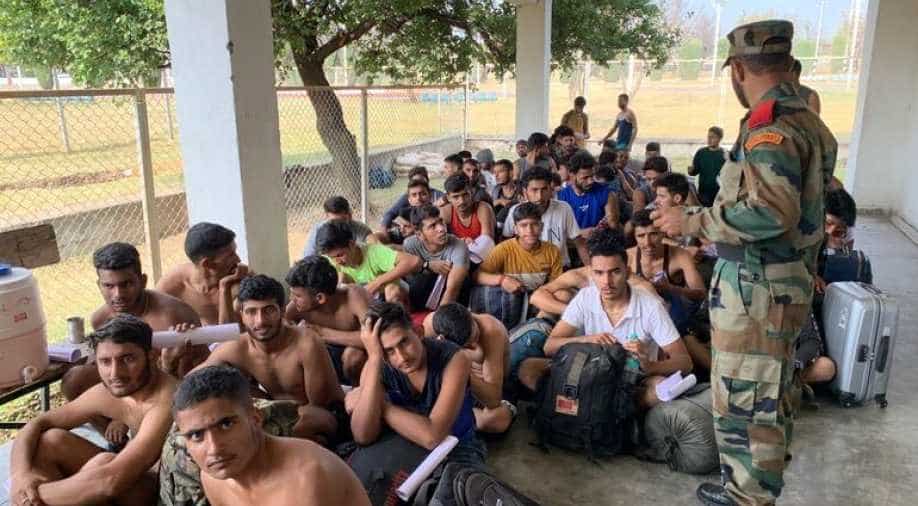 Youth line up to join Indian Army in Jammu and Kashmir. Photograph:( WION )

This is part of the major announcements made by the J&K Governor Satya Pal Malik in his last press conference about opening up new opportunities for youth in the state.

For the first time after the abrogation of Article 370, the Indian army organised a recruitment rally in Srinagar which witnessed large participation of youth, mostly from the far-flung villages and districts of Jammu and Kashmir. This also comes at a time when Pakistan continues to violate ceasefire on the Line of Control (LoC).

This is part of the major announcements made by the J&K Governor Satya Pal Malik in his last press conference about opening up new opportunities for youth in the state.

"I hail from Kupwara, a frontier district and since my childhood, I wanted to join the Indian army. The timing right now is critical and I want to serve the army," said young Nasir Ahmad, who has just passed his higher secondary school.

During a recruitment rally, 2780 aspiring youth from all over J&K turned up for enrollment as soldier general duty, tradesmen and clerk with full enthusiasm. The two-day long drive will see young boys from the state sweating it out to make it to the Indian army’s J&K light infantry.

"This vacancy is being filled by the combined effort of ARO Srinagar, Jammu and JAKLI regimental centre. We would see a range of 1000 to 1200, however on the first day, 2000 candidates have arrived which is an encouraging sign," says  Brigadier SR Sharma, Commanding officer, JKLI Regimental Centre Srinagar.

Most of these boys hail from the frontier districts where shelling and firing by Pakistan make life miserable. These young men say that they are willing to serve the nation on the fence and are ready to tackle any situation.

"I questioned myself and figured that I should be in the army. Since morning, I have passed several tests and feel I will qualify other too," says Mir Sartaj from Kokarnag area of south Kashmir where terrorism has been a cause of concern.

The employment rate in the state is very low and the Indian army has been long providing employment opportunities to the youth. The selected youth will dawn the military uniform after going through tough one-year-long training.

The Jammu and Kashmir Light Infantry was started in 1947. It has participated in many wars including the Sino-India War of 1962. In 1984 this unit was deployed to the Siachen Glacier as part of Operation Meghdoot.