“Wish to meet him once and seek his blessings,” says Tamil Nadu farmer who built temple for PM Modi Shankar said that he immensely benefited from the PM-KISAN scheme that provided Rs.6000 every year to farmers who held land up to 2 hectares.

It is not a new practice for Tamilians to show their love and respect for their icons by building temples in their honour. After temples were built for former Chief Ministers MGR, Jayalalithaa and Karunanidhi and a host of popular actors, a Narendra Modi temple have now been built in the Eragudi village in Tamil Nadu’s Trichy district.

The temple in honour of the current Indian Prime Minister was constructed by Shankar, a 50-year-old farmer who has been an admirer of the leader, since his days as Gujarat Chief Minister.

“I used to look up to him right from the time he was Chief Minister of Gujarat. Especially I have admired the manner in which he has developed the infrastructure in the State. The moment we knew that he was chosen as the PM candidate of the BJP, I was excited and have voted for him since then” Shankar told WION. 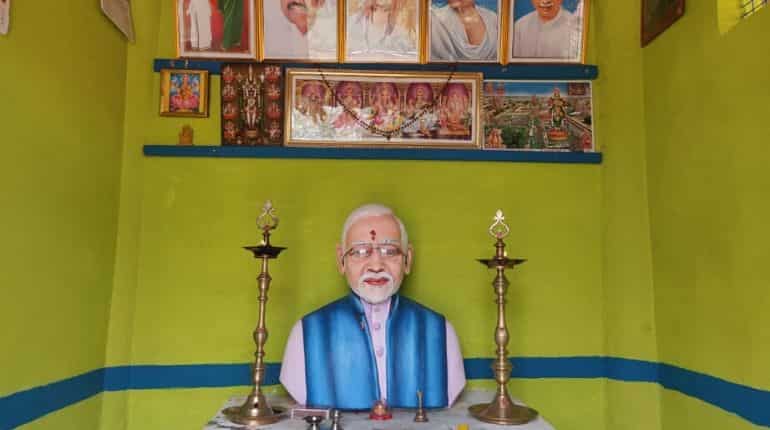 Constructing the temple, however, was not an easy task. Shankar says that he had to wait for a period of eight months for his 8ft x 8ft temple to get ready. “Our main source of income is agriculture on our 10-acre plot and I also have to take care of the needs of my children who are in college. So we first build the foundation and waited for over three months, later the pillars were erected, following which the tiles were laid and work was completed.”

Shankar also recalls that their family was very poor and how he lost his parents at a young age, how he had to discontinue his education while he was in his fourth grade." it was only by doing menial jobs that I earned some money to go to Saudi and work. I was rearing camels and sheep there, after working herd there for many years, I came back to our native and bought cultivable some land."

When asked if he had benefitted from any schemes of the Modi Government over the last few years, he said that he immensely benefited from the PM-KISAN scheme that provided Rs.6000 every year to farmers who held land up to 2 hectares. “While Congress had announced various schemes for farmers during their rule, much of the benefits didn’t reach us as there was a vicious cycle of middlemen. But now all the benefits are being directly transferred to our account.”

Recalling the trauma that their modest family underwent in 2013 after his daughter couldn’t get admission into a medical college, despite having scored 1105/1200 in her State Board exams, he stated that she had to settle for an Engineering degree by sacrificing her dream of becoming a Doctor. “Later when the NEET(National Eligibility cum Entrance Test) was introduced by the Modi Government, it had ensured a level playing field such that even students from very humble backgrounds can aspire to get a medical seat by merit.  My daughter couldn’t become a Doctor, but we hope that our son who is now in his 12th grade will clear NEET and join a medical college.”

Besides the KISAN scheme, Shankar says that their family has also built their first toilet under the Swachh Bharat Abhiyan. Our family was in such a situation that we had always used firewood for cooking, but the Ujjwala Yojana changed things for the better and now we have access to LPG cylinders and cooking stoves.

On being asked about any specific requests he has for the Prime Minister, he said that if the river interlinking project were to be implemented, in his drought-prone district, lakhs of farmers like him would be able to sustain agriculture.

“I went to Mamallapuram to catch a glimpse of our PM during the Modi-Xi summit there in October and was able to see his motorcade from a distance. But I would consider it my life’s greatest opportunity if I get to meet our PM once, and I would fall on his feet to seek his blessings.”

Shankar says that many people have been flocking to his village every day to see the ‘Namo’ temple, he hopes to someday call top BJP leaders to perform grand rituals at his temple. Either way, he says he would perform the daily offerings at the temple for the rest of his life.