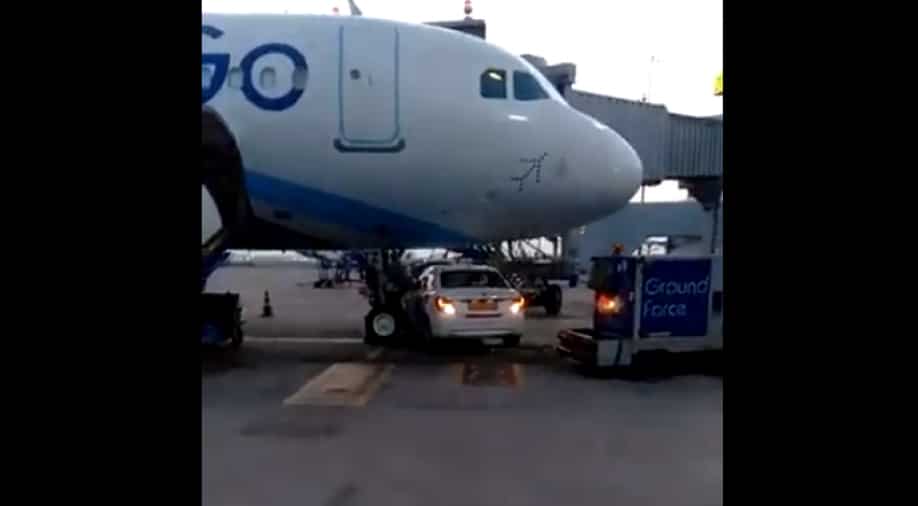 A screengrab of the car under IndiGo A320neo aircraft at the Delhi airport Photograph:( ANI )

The incident comes in the backdrop of DGCA initiating a two-month-long audit to find the reasons for the unusual problems persisting in the Indian airline industry.

The IndiGo flight 6E-2022 was being prepared to depart for Patna when a white Swift Dzire car belonging to rival Go First airline came from nowhere and stopped under the nose of the plane.

India’s civil aviation regulatory body Directorate General of Civil Aviation (DGCA) informed that neither did the plane body suffer any damage nor were any aircraft maintenance crew hurt by the rogue car.

#WATCH | A Go Ground Maruti vehicle stopped under the nose area of the Indigo aircraft VT-ITJ that was parked at Terminal T-2 IGI airport, Delhi. It was an Indigo flight 6E-2022 (Delhi–Patna) pic.twitter.com/dxhFWwb5MK

Reportedly, the aircraft departed as per schedule as well. Meanwhile, a probe has been initiated into the accident. A video of the incident shows an airport crew blaming the driver for sleeping and nearly ramming into him.

However, a breath analyser test for consumption of alcohol conducted on the driver returned a negative result.

DGCA has initiated a two-month-long audit

The incident comes in the backdrop of DGCA initiating a two-month-long audit to find the reasons for the unusual malfunction problems persisting in Indian planes.

The two-month audit was initiated after DGCA, whilst conducting spot checks, found that unqualified and inadequate engineering personnel were greenlighting the flying of planes.

As reported extensively by WION, last month, two Indian planes had to land in the neighbouring country of Pakistan after developing technical snags.

The first plane to land in Karachi was a Dubai-bound Delhi Spicejet flight on July 6. Reportedly, the plane had developed a fuel issue.

However, it was only after the emergency landing that it was revealed that the issue was caused due to a malfunctioning fuel indicator light in the cockpit.

In a separate incident, IndiGo’s Sharjah-Hyderbad flight 6E-1406 was forced to land in Karachi. Afterwards, another flight was dispatched to Karachi to fly the passengers back safely.