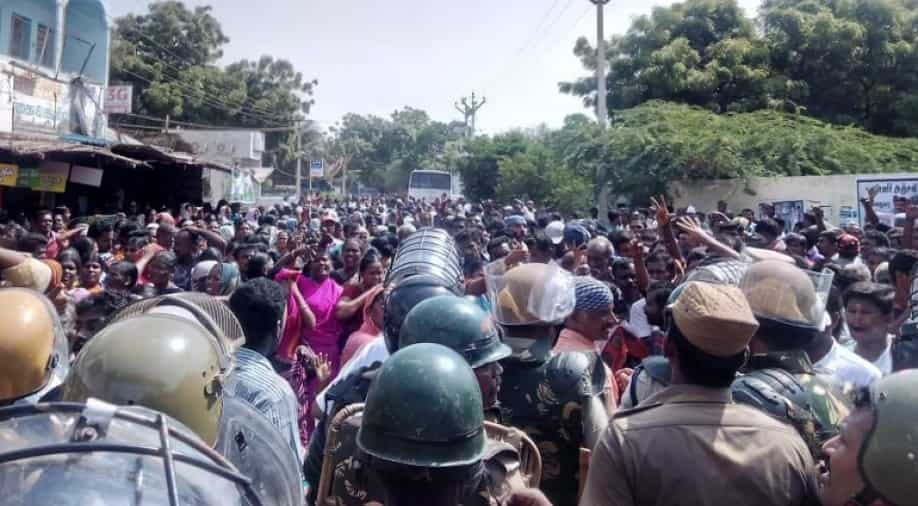 As many as 11 people have been reported dead in clashes between locals and the police in Tamil Nadu's Tuticorin. According to reports, Union Home Ministry has demanded a report from the Tamil Nadu government over anti-Sterlite protests.

Home Ministry seeks a report from Tamil Nadu govt over #Thoothukudi incident where 11 people were killed yesterday in police firing during protests against Sterlite industries. pic.twitter.com/MjSK2tzHYR

Chaos broke out as locals continued to protest Sterlite’s industrial plant for the 100th consecutive day on Tuesday.

As per reports, the protesters seek closing of the industrial plant. Agitators also ransacked the Collector’s office and burnt tyres.

Visuals from the ground showed policemen charging at protesters with lathis who pelted stones at them.

Several shops and commercial establishments remain closed in Tuticorin due to violent protests.

Security tightened in #Thoothukudi after eleven people were killed yesterday in police firing during protests against Sterlite industries. Section 144(prohibits assembly of more than 4 people in an area) has been imposed in the city. #TamilNadu #SterliteProtest pic.twitter.com/cyOUFrxCGC

So far, there have only been temporary shutdowns and the plant has continued with its operations.

This year, fresh protests started in February when the company commenced works on its second unit amid opposition from the local people.

Section 144 of the CrPC (Criminal Procedure Code which lists out the procedure for administration of law in India), which prevents unlawful assembly of people in an area, has been imposed in and around the Sterlite unit. There is a heavy deployment of police in the city, with additional forces being rushed in from neighbouring cities as well.

Meanwhile, Tamil Nadu Chief Minister K Palaniswami announced a compensation of Rs 10 lakh to the families of each of those killed, Rs 3 lakh to those seriously injured, and Rs 1 lakh for people who suffered minor injuries.

The Sterlite plant is a copper unit of Vedanta Limited.