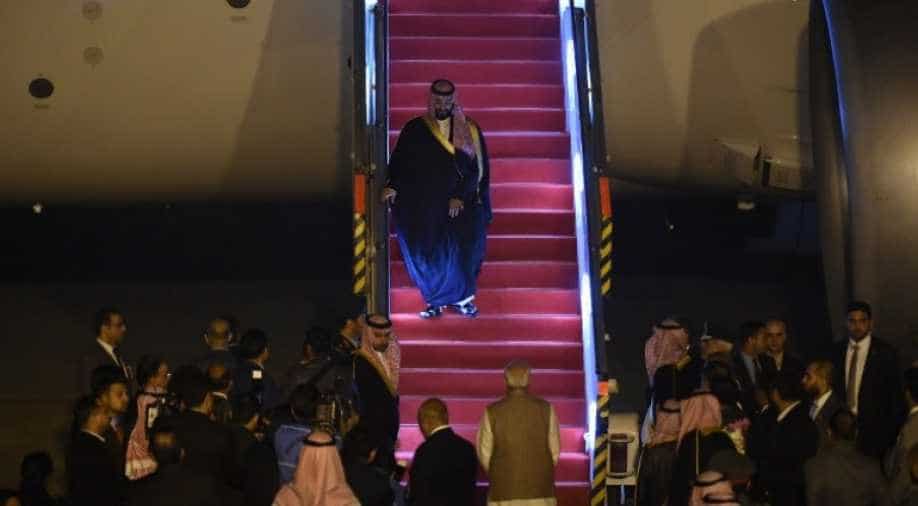 Saudi Arabia's Crown Prince Mohammed bin Salman, who is also the Gulf nation's defence minister on Tuesday arrived in New Delhi for his first state visit to the country.

Mohammed bin Salman was warmly embraced by Prime Minister Narendra Modi as he stepped onto a red carpet at IGI airport in New Delhi.

India is likely to strongly raise the issue of Pakistan-sponsored terrorism with Saudi Arabia's Crown Prince Mohammed bin Salman even as the two countries will look at further enhancing defence ties, including having a joint naval exercise, during his two-day visit here beginning today.

Ahead of the visit by the Crown Prince, Saudi Arabia's Minister of State for Foreign Affairs Adel al-Jubeir said in Islamabad on Monday that Riyadh will try to "de-escalate" tensions between India and Pakistan in the wake of the deadly terror attack in Pulwama by Pakistan-based Jaish-e-Mohammad.

Official sources said Saudi Arabia was no longer accepting Pakistan's narrative on Kashmir and cross border terrorism and that India will forcefully raise the issue of Pakistan's support to terror groups during delegation-level talks between Prime Minister Narendra Modi and the Crown Prince on Wednesday.

They said the joint statement to be issued after talks between the two sides is likely to have a strong reference about terrorism and ways to deal with it.

Secretary, Economic Affairs in the External Affairs Ministry T S Tirumurti said both sides are expected to sign five agreements in areas of investment, tourism, housing and information and broadcasting during the Saudi leader's visit.

"We are confident that this visit will open a new chapter in India-Saudi bilateral relationship," he said.

Referring to cross border terrorism, he said, "Saudi Arabia has strongly condemned and denounced the terrorist attack on Indian security forces in Pulwama on 14 February. We appreciate Kingdom's cooperation in security and counter-terrorism areas over the years."

Official sources said there has been a "change" in the way Saudi Arabia looked at relations between India and Pakistan and that the powerful Gulf nation has a better understanding of the cross-border terrorism.

"India has been identified as one of the eight strategic partners with whom Saudi Arabia intends to deepen partnership in areas of political, security, trade and investment and culture," said Tirumurti.

"As part of this engagement, we are finalizing the setting up of 'Strategic Partnership Council' between the two countries at ministerial level. We are confident that this will give greater thrust to our strategic partnership and take forward our discussions in a focussed and action-oriented manner," he said.

The sources said the two sides are looking at joint exercise between the two navies besides significantly ramping up overall defence cooperation.

They said Saudi Arabia has been providing India information and intelligence about various terror networks.

The two countries had inked a pact on the exchange of intelligence related to money laundering and terrorism during Modi's visit to Riyadh in 2016.

Modi will host a lunch in honour of the Crown Prince at Hyderabad House on Wednesday.

During the visit of PM Modi to Saudi Arabia in 2016, an MoU on cooperation in exchange of intelligence related to money laundering and terrorism financing was signed. The Kingdom has shown a greater understanding of India's terrorism-related concerns and also agreed to work with India in countering this global menace.

The two countries held a meeting of 4th Joint Defence Cooperation Committee last month in Riyadh during which both sides explored the possibility of elevating the defence engagement with joint production and joint exercises, particularly joint naval exercises, said Tirumurti.

Saudi Arabia is also a key pillar of India's energy security, being a source of 17 per cent or more of crude oil and 32 per cent of LPG requirements of India.