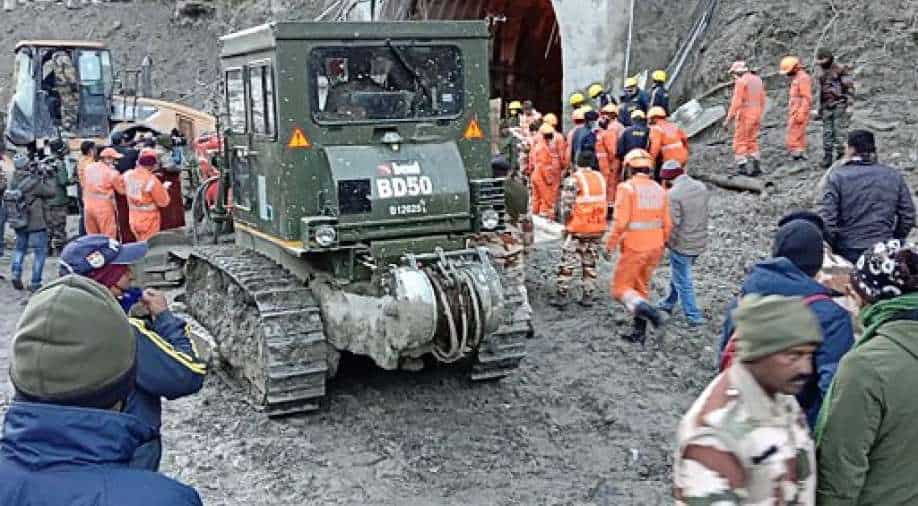 At least 18 bodies have been recovered from different places affected by the deadly floods so far. The river's water level rose instantly following an avalanche near the power project on Sunday.

Rescue operations continued on Tuesday to free people trapped inside a tunnel in Tapovan in Uttarakhand after a glacier broke off in Uttarakhand's Chamoli district on Sunday triggering an avalanche.

SDRF teams along with other members of the rescue teams have been engaged in the tunnel operations with over 30 workers feared trapped in a tunnel at a power project site.

As heavy excavators were brought to remove the debris and slush to open the tunnel, the multi-agency rescue operation including the Indo-Tibetan Border Police(ITBP)  and national disaster response force continued its rescue mission with the forces clearing 90 meter stretch of debris in the big tunnel at Tapovan till now, with about 100 meters of clearing still left.

Aerial rescue and relief missions have resumed with Indian Air Force's Mi-17 & Chinook helicopters flying from Dehradun to Joshimath with disaster relief teams on board. The operation to rescue the people trapped in a tunnel is underway with efforts on to clear the tunnel with the help of JCB machines.

At least 18 bodies have been recovered from different places affected by the deadly floods so far. The river's water level rose instantly following an avalanche near the power project on Sunday.

The massive burst of water tore through the Dhauliganga river valley, destroying everything in its path. The glacial burst triggered an avalanche and a deluge in the Alaknanda river system that washed away hydroelectric stations.

The chief minister of Uttarakhand state has announced four lakh rupees of financial assistance to each kin of the deceased. PM Modi has also approved an ex-gratia of Rs 2 lakh each for the next of kin of those who have lost their lives due to the avalanche.

An additional 50,000 rupees would be given to those seriously injured. The local authorities have advised people living on the banks of the river to move to a safe place.