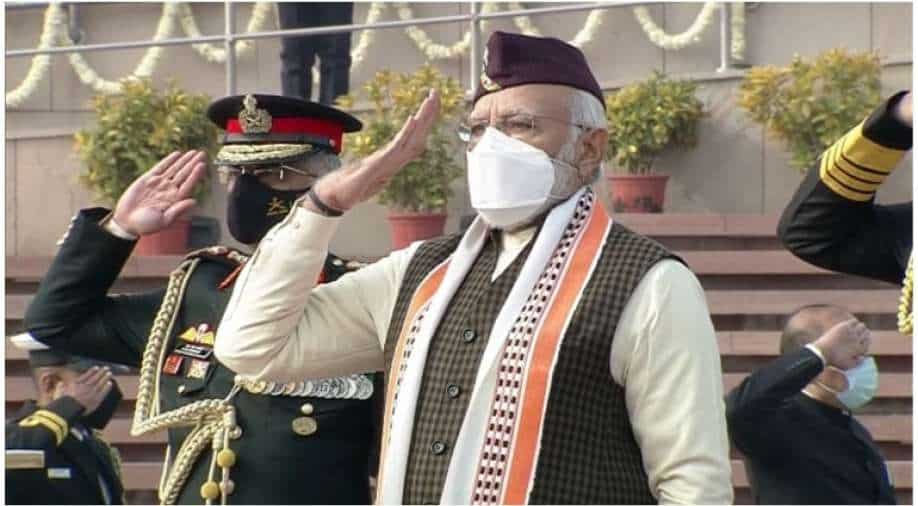 PM Narendra Modi is Wearing the Cap from Uttarakhand along with Brahmakamal, which is the state flower of Uttarakhand. He uses this flower whenever he does pooja at Kedarnath. PM is also seen wearing a stole from Manipur. Photograph:( IANS )

PM's attire at Republic Day 2022 was a departure from his usual practice of wearing turbans at Republic Day and Independence Day events. This time, PM Modi sported an Uttarakhand cap and a Manipur stole

Republic Day 2022 celebrations made news for Indian Prime Minister Narendra Modi's attire as the premier chose to depart from his usual sartorial choices. Giving the customary turban a miss,  the PM chose to wear Uttarakhand cap as he attended the celebrations on Raj Path in New Delhi.

The cap had an image of 'Brahmakamal' a flower that has come to be associated with mythical connotations in Indian history and spirituality. It is also the state flower of northern Indian state of Uttarakhand.

In addition to the cap, PM sported a stole from Manipur, a state located in Northeast India.

Official sources said Modi uses the brahmakamal whenever he offers prayers at Kedarnath.

Turbans have been a highlight of the prime minister's sartorial choices at Independence Day and Republic Day events.

Last year, he sported a special turban from Gujarat's Jamnagar on 72nd Republic Day. On Independence Day last year, he chose a saffron headgear with red patterns and a long plume.

For his maiden Independence Day speech in 2014, he had opted for a bright red Jodhpuri bandhej turban with green at the tail.

In 2015, he chose a yellow turban covered with multi-coloured crisscross lines, and a tie and dye turban in hues of pink and yellow in 2016.

The prime minister's turban for 2017 was a mix of bright red and yellow with crisscrossed golden lines all over. He donned a saffron turban for his appearance at the Red Fort in 2018.

Both Manipur and Uttarakhand are headed for polls next month.