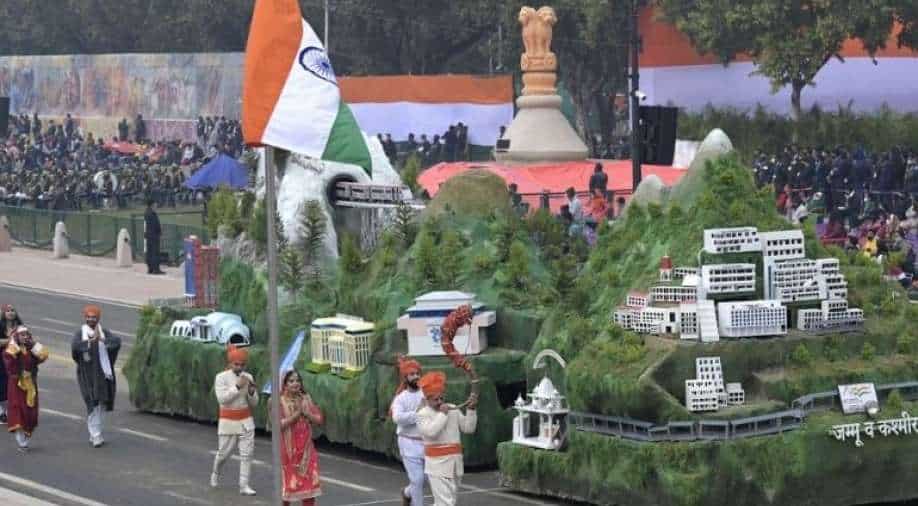 A tableaux of the Indian State of Jammu and Kashmir takes part in the full-dress rehearsal for the upcoming Indian Republic Day parade in New Delhi Photograph:( AFP )

The hymn written by Scottish Anglican poet and hymnologist Henry Francis Lyte in 1847, had been part of the Beating Retreat ceremony since 1950

The central government has dropped the hymn 'Abide with me' from the musical line-up of Republic Day.

'Abide with me', written by Scottish Anglican poet and hymnologist Henry Francis Lyte in 1847, had been part of the Beating Retreat ceremony since 1950.

Also see | The making of a republic: Negotiations that led to creation of India as a republic

Beating Retreat marks the end of nearly week-long festivities of Republic Day, which used to begin on January 24. But this year, the celebrations will begin on January 23, the birth anniversary of Netaji Subhash Chandra Bose.

It was the favourite hymn of Mahatma Gandhi, who is popularly known as the 'father of the nation.'

For this year's ceremony, the hymn has been replaced by the popular patriotic song "Ae Mere Watan Ke Logon", which was written by Kavi Pradeep to commemorate the supreme sacrifice made by Indian soldiers during the 1962 Indo-China war.

It comes after the eternal flame at Amar Jawan Jyoti was shifted to the National War Memorial.

India’s annual Republic Day parade is a flamboyant display of the South Asian nation’s military might and cultural diversity in the heart of the capital, New Delhi.

India’s military forces go on full display during the two-hour parade, with troops, rows of tanks, missiles and formations of horses and camels maneuvering down the wide Rajpath (King’s Way) boulevard.

During the event, bravery awards are given to military personnel, civilians and children for showing “courage in the face of adversity”. The event is presided over by the president, commander-in-chief of the armed forces.

India’s Border Security Force are regular favorites in the show, with their “Daredevil” motorcycle riders appearing in gravity-defying balancing acts and their camel contingents toting guns and musical instruments.

India won independence from British rule on August 15, 1947, but it was not until January 26, 1950, that the nation declared itself a sovereign republic state with the adoption of its constitution. On that day, Rajendra Prasad, India’s first president, unfurled the national flag, and thereafter January 26 became a national holiday, Republic Day.